The Charticle: Game of War is the 6th most lucrative game on iOS 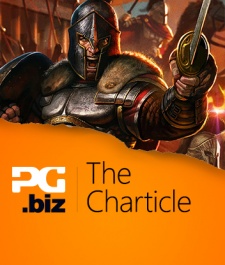 There's an argument doing the rounds that the US top grossing charts are 'frozen'. US developer Machine Zone is one counter-argument.

Sure, it's no small indie newcomer. Founded as Addmired, the US developer has been successfully releasing iOS MMOGs (Global War, iMob 2) since 2009, raising $13.3 million in funding in the process.

But its latest game Game of War: Fire Age demonstrates that relatively unknown outfits can have very strong commercial success, even when competing with the likes of DeNA, GREE and Kabam.

As we considered in our Monetizer column when Game of War was released (in late July 2013), the persistent city-building Alliance-focused PVP strategy game ranks highly on our scale - scoring 299. Any game scoring over 100, we consider to be highly monetised.

In the case of Game of War, this because it has a sophisticated IAP economy that combines the purchase of in-game resources with Alliance gifts, as well as having multiple item bundles and limited-time offers.

The minimum spend is also a relatively high $4.99, although the game does feature generous discounting for those who do spend money.

It's this - combined with a strong events system and of course a strong player base - that has pushed the game up the top grossing charts.

Game of War first hit the top 20 of US top grossing in August, only to fall back when Apple tweaked its ranking algorithm.

Since then, however, it's been on the up and up, now sitting pretty at #4 on both the iPhone and iPad US top grossing charts.

Indeed, Distimo, the market intelligence company, estimates the game was the #6 top grossing iOS game globally during September. (It's not been released on Android.)

Looking at this success through a different lens, we can see how our Monetizer Success ranking has changed since August.

Now, however, it's a massively improved 0.2 on iPhone and 0.22 on iPad; demonstrating strong commercial success.

All over the world

In terms of geographical breakdown, Distimo estimates around 46 percent of Game of War's revenues during September were generated in the US, with the UK, Australia, Canada and France the other top markets in terms of revenue.

Chart performance has also been strong in Russia and other eastern European countries including Slovenia, Slovakia, Bulgaria, the Czech Republic and the Baltic states, in which it has been a top 5 top grossing app.

Game of War has been a top grossing success in Russia

In September, Distimo reckoned 59 percent of sales were on iPhone with 41 percent on iPad, while downloads were around 1 million, compared to 1.6 million in August.

The UK is the second most lucrative market for Game of War, but as can been seen below, it's had little impact in either Korea or Japan; perhaps both for cultural and hardware reasons - it's not been released on Android.

Methodology: Distimo AppIQ provides download and revenue estimations for any app worldwide, based on daily sampling of transactional app data (>3 billion downloads / quarter) and publicly available information. When calculating downloads and revenues for individual apps, Distimo's unique methodology excludes that app's transactional data from the analysis to preserve the confidentiality of their users' data.