China to overtake US as #1 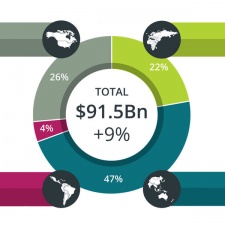 The company’s projections have not only charted by how much revenues will grow, but from where.

It predicts that in 2015 the rapidly-expanding Chinese market will edge ahead of the US as the single biggest revenue contributor.

While the American market will increase by 3 percent to hit $22 billion, China will jump 23 percent to bring in $22.2 billion.

In total, the APAC region, including China, will account for 47 percent of the market, or $43.1 billion.

Latin America, meanwhile, is the smallest of the four major markets with just $4 billion in revenues – though its 18 percent year-over-year growth also sets the region as one of the quickest.

In terms of gaming categories, Newzoo breaks this down to

The tablet part of the category is growing the fastest at 27% year-on-year, but handhelds will be down 16%, reducing overall growth to 14%.

In terms of combined phones and tablets market size, Newzoo predicts it will be worth $30 billion in 2015.

$7.7 billion Chinese mobile game market to overtake US in 2016