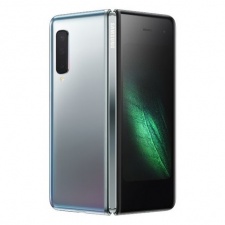 Samsung has unveiled its first foldable phone at its Samsung Unpacked event in San Francisco, California.

The new Galaxy Fold is the company’s first foray into the foldable mobile market and features a 7.3-inch infinity flex display. This allows the phone to fold out into a bigger widescreen (akin to a tablet) before being folded back to its original position.

The device is Samsung’s largest-ever smartphone display to date. According to the company, the Galaxy Fold is designed to make multitasking easier while improving the way we watch videos and play games. The concept has been in development since 2011.

Samsung’s Galaxy Fold will be available in the US from April 26th and will cost from $1,980.

“Today, Samsung is writing the next chapter in mobile innovation history by changing what’s possible in a smartphone,” said Samsung Electronics president and CEO of IT and mobile communications division DJ Koh

“Galaxy Fold introduces a completely new category that unlocks new capabilities never seen before with our infinity flex display. We created Galaxy Fold for those that want to experience what a premium foldable device can do, beyond the limitations of a traditional smartphone.”

At the event Samsung also revealed its new Galaxy S10 model. The new device will include faster Wi-Fi 6, an ultrasonic fingerprint sensor and a wireless powershare feature.

Samsung’s Galaxy S10 will arrive in US stores from March 8th and will be priced from $899.

The firm has partnered with Unity Technologies in an attempt to make games run better on the device.