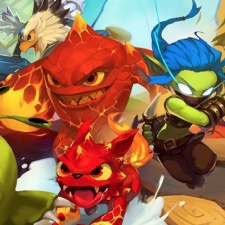 Skylanders Ring of Heroes has officially launched on mobile in 120 different countries across the App Store and Google Play.

Developed by Summoners War developer Com2us, the RPG sees players explore the world as Spyro and co while tracking down the villainous Kaos to return the stolen Book of Dark Magic. Along with the 10-part story, users can take part in dungeon challenges, fight in PVP matches and customise their characters through a number of different upgrades.

New to the series, Ring of Heroes will include the ‘awakened’ forms of each Skylander. Anyone that has pre-registered will receive an in-game Soul Stone that will allow players to summon one of the most popular Skylanders.

The game was originally revealed in June 2018 before being soft-launched in Australia, Canada and New Zealand.

"We're really excited to see how Skylanders Ring of Heroes will perform in Western markets, as the IP is already well-established there,” said Gamevil Com2us US vice president Casey Lee.

“We'll certainly do our best to provide Skylanders fans and mobile RPG fans with a fun RPG experience so that you can bring your favourite Skylanders squad into your mobile device."

Activision Blizzard recently stated that mobile games development has become a “top priority” for the company. The publisher is looking to bring more of its hit IP to mobile successfuly, and already has titles such as the ill-received Diablo Immortal from NetEase and a Tencent Call of Duty in the works.