First event in the Middle East and North Africa region 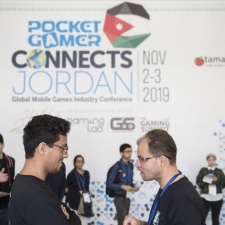 Following successful events in London, Seattle, Hong Kong and Helsinki, the final outing of the Pocket Gamer Connects conference series in 2019 was also our very first in the Middle East and North Africa region.

Despite being a brand-new show, PGC Jordan boasted some impressive numbers with over 700 registered delegates from 30 countries taking part, including a broad representation of MENA countries plus stars from Europe, USA and Asia.

Over the two days, visitors were inspired by 60 speakers providing 35 hours of content across 10 tracks, and took part in well over 500 organised meetings using the free Pitch & Match system.

As well as showcasing talent from across the region and being the largest b2b games event yet seen in MENA, the event was noticeable for its gender split, offering a pleasingly high percentage of female delegates.

Suffice to say there were plenty of fringe events too, with a high quality of local talent displaying the fruits of their labours to publishers, press and platforms in the Very Big Indie Pitch, Publisher SpeedMatch and Investor Connector sessions. The Very Big Indie Pitch was won by Hako Games’ Mulled 2 (mobile) and Monupon’s Wild Thieves (PC).

Jordan is once again the bridge between the East and the West, as it was at the time of the Silk Road

During PGC, the IMGA MENA awards took place on Saturday evening, with this year’s Grand Prix going to Shadow Of Naught by Iran’s Hassan M Golshan, who also won three other awards. The People’s Choice gong went to Hados 2 by Iran’s Mehdi Peighaminasab and the Jury’s Honorable Mention went to Linn: Path Of Orchards by Zeynab Mousavi from UAE.

A further 12 other categories were celebrated at the ZINC campus at the King Hussein Business Park in Amman, just around the corner from the PGC venue.

A wonder of the world

To showcase the culture and tremendous hospitality of the region, the event was book-ended by a traditional VIP dinner on Friday night, and a day trip to Petra, one of the wonders of the modern world, on Monday. Delegates travelled 230km south from the capital to the fantastic archaeological site in the company of a guide, to explore the world-famous location.

The Jordan Gaming Summit will continue after Pocket Gamer Connects Jordan 2019 by travelling round the country. The tour begins on November 15th and runs for two days, visiting the south, centre and north of Jordan. The Gaming Lab team took notes from all this week’s sessions and will share key insights with the community who could not attend the show in person. So the success of Pocket Gamer Connects Jordan 2019 doesn’t stop with the 700 people who registered in Amman – the knowledge and workshop information will spread.

Nour Khrais, Jordan Gaming Lab technical partner and chair of the Jordan Gaming Task Force, commented: "Today, in partnership with a global conference such as Pocket Gamer Connects, we reaffirm that Jordan is the gateway for global game developers to access the Middle East and North Africa. Jordan is once again the bridge between the East and the West, as it was at the time of the Silk Road. Thanks to the continued support of the King Abdullah II Fund for Development in supporting the gaming cluster in Jordan since 2011.

"The conference brought together a group of world-class speakers from leading gaming companies and industry leaders in the region to share their experiences with the latest developments in the gaming industry technology and business.”

Steel Media CEO, Chris James, was clearly encouraged by what he saw: “Our intent was to try to recreate the same quality, community and business matchmaking that we deliver elsewhere. And I think the Steel Media team, in association with our local partners from the King Abdullah II Fund for Development, did a fantastic job.

“We were bowled over by the passion, enthusiasm and talent in the region, as well as the incredible hospitality on display. Combine this with an ever-growing (and currently underserved) Arabic-language market and its fair to say there’s something really special happening here that the rest of the industry should take note of – we’re certainly privileged to play some part in it and will most definitely be back next year!”

The Pocket Gamer Connects series may be over for 2019, but it will return in 2020, starting with PGC London on 21st-22nd January. And, as usual, we’ll also be sharing videos from the show on our YouTube channel in a month or so’s time, so if you missed out last weekend you’ll be able to catch up with our world-class speakers and panellists then.

Last chance to save on tickets for Pocket Gamer Connects Jordan