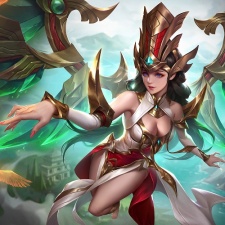 Chinese giant Tencent has launched its popular action MOBA Arena of Valor in Russia as well as throughout Middle Eastern and North African territories (MENA) today.

Developed by TiMi Studios, Arena of Valor was previously available on both the App Store and Google Play in 82 countries or regions but will now make its way to another 67 globally.

Arena of Valor has accumulated 200 million players worldwide, with the developer confirming that it is seeing a rise in month-over-month daily play numbers since making "major optimisations" to the game in late 2019.

Other stats provided state that the player base is made up of 70 per cent males and 30 per cent females across the Americas and Europe, with more than half of its players born in 1990 or later.

"Our understanding of the MOBA genre and our capabilities in competitive game development, has given us a great advantage in the globalised value chain - we've been at the front end of high quality, high fidelity core game development for the mobile platform," said Arena of Valor executive producer Ray Ning.

"Leveraging our expertise, which is nurtured in China and proven in 82 countries and regions, we're constantly investing in competitive games and working with players around the world to push the standard of the global mobile game industry to the next level."

Arena of Valor has been available in the West for quite some time however has not found the same level of success as Asian territories (where it is known as Honor of Kings).

Following this struggle to gain ground, it was reported that Tencent changed its strategy and will no longer concentrate efforts on growing the game in the West.