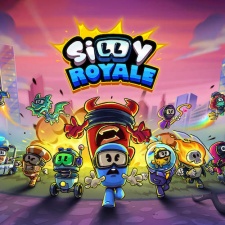 Almost five million downloads were driven by a recent in-game event, Squid Royale, which was inspired by the Netflix series Squid Game. During the event, players participated in 1.5 million matches and spent an average of 48 minutes in the game.

The most popular in-game skin during the event was Player 199, reminiscent of Squid Game character Ali, an immigrant from Pakistan, which Silly Royale attribute to a strong player base in the country.

Don't swear at me!

Earlier this year, SuperGaming revealed that its mobile shooter game MaskGun had accumulated over 60 million downloads across its three year lifespan, highlighting the growth of the Indian developer.

"The most surprising fact was that our players are using Silly Royale as a space to hang out with friends, clocking in more than 165 million voice minutes since we introduced this feature," said SuperGaming co-founder and general manager Christelle D'cruz.

"We love the way our players have interacted with the original modes of the game and their response to Squid Royale too."

SuperGaming has reported that although the game is popular in India it has been growing in popularity in other Asian countries, as well as the Americas and Europe, including the US, Brazil, Italy, and Indonesia.

Furthermore, SuperGaming has launched the Silly Royale Creators programme to allow creators to sign up and share their content through spotlights on the game’s social channels.

Last month, SuperGaming publicised its intentions to enter the blockchain and Web3 space with the appointment of co-founder and COO of WazirX Siddharth Menon as a blockchain advisor.