From Clash of Clans to Clash Royale: How portrait mode trumped tablet-first gaming 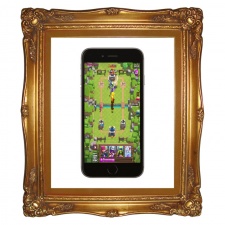 It wasn't that many years ago that a failed Facebook game developer bravely nailed its colours to the then nascent mast of tablet gaming.

"There's absolutely nothing wrong with smartphones," he added.

"Our games will support smartphones as well, but our primary focus will be to create the optimal experience on a tablet."

Of course, the rest is history.

It may not have been trumping its 'tablet-first' strategy in 2014, when Supercell's third game Boom Beach was released.

But just like its first two games, Boom Beach was designed to be played in landscape mode.

In that sense, it was still a game for gamers who played with two hands on a bigger screen. They were seen as the target market for mobile gaming.

That view is now ancient history.

For, continuing our train of thought, Clash Royale is radically different from Supercell's previous games.

It's designed to be played on a phone in portrait (or upright) mode.

Similarly, the user experience is designed for one handed play.

There's nothing complex going on. There's no need for pinch-zooming or expansive screen real estate. Everything sits nicely under your thumb.

And it's not just Supercell either.

The tablet experiment kickstarted by Apple's iPad in 2010 has now stalled.

Glu Mobile's biggest hit, 2014's Kim Kardashian: Hollywood wasn't a game for core gamers, but it was designed to be played in landscape mode.

It's designed to be played on your phone.

And, in a neat counter example, one of the reason Katy Perry Pop - another game in Glu' celebrity series - was a flop was its orientation - you got it, landscape mode.

Some might argue that the trend has something to do with the growing size of mobile phones themselves.

Certainly, phone screen size has increased considerably since 2012, especially for iPhone users. But that's not the fundamental reason.

The tablet experiment kickstarted by Apple's iPad in 2010 has now stalled. Quarterly sales have been on the decline for a year, and that's even taking into account the arrival of the phone-sized iPad minis.

Indeed, the iPad mini is another notch in phone's victory over tablets, and a good example that screen size has been vastly overestimated, compared to features such as portability, personalisation and ease of use.

And it's these aspects in terms of how people actually use their touchscreen devices that is best reflected in the rise of the portrait mode for games.

It's how they use their always-available phone for texting and browsing etc (only using one hand) and that's how they expect to play their games too.

Japan's topping grossing games have always been in portrait mode.

Actually, they don't even think of it as gaming. It's just another way to pass the time.

Designing a game to be mobile-first (not tablet-first) makes it more accessible and hence increases its potential profitability too.

It's something Machine Zone has always known, of course.

Despite Game of War and Mobile Strike being hardcore in the extreme, they're both portrait games, set up with a simple UX and designed for maximum ease of use.

Does that mean there's no place for landscape or tablet games?

No. Kabam's Marvel: Contest of Champions is a game designed for landscape mode and it was the company's fastest title to $100 million in revenue.

Obviously, both are midcore games attached to big brands, and maybe that's why they've been able to succeed against the trend.

But 'tablet-first' games are dead and the landscape mode for gaming isn't fair behind; at least unless you can pivot your business in the way that Super Evil turned its 'tablet-first' MOBA Vainglory from a mobile game into an eSport.

Because, make no mistake, any game that isn't primarily designed to be played using one-hand on a phone held in its natural upright position, is fighting a losing battle with two hands outstretched in surrender.