While Pokemon GO has adapted and thrived, others have come up short 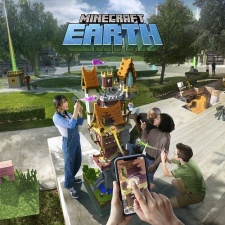 Minecraft Earth has amassed approximately $498,000 in global lifetime revenue at the time of writing, according to Sensor Tower data.

The location-based AR brick building title became the latest victim of the Covid-19 pandemic, with developer Mojang announcing that all operations will cease in June 2021. This also included the removal of all real-money transactions, meaning the game failed to cross half a million in total revenue since launching in December 2019.

Interestingly, when it comes to lifetime installs, Minecraft Earth faired quite well at 18 million downloads, with 7.3 million of that number gained during 2019. The remaining 10.7 million installs were generated throughout 2020 - something that the studio can take away as a positive, considering the worldwide lockdowns.

Note: Minecraft Earth went into early access on October 17th, 2019 in New Zealand and Iceland before rolling out to further countries over the following weeks.

These downloads were mostly attributed to the US, claiming almost six million of the total. Saying this, those installs did not convert to revenue in a strong capacity across any territories, with the US only accumulated $305,000, yet ranking first. The UK and Canada then followed in second and third position respectively.

In 2019, Minecraft Earth picked up $242,000 in global revenue but struggled to grow that figure with $255,000 earned in 2020. Specifically in the US, the game could not build an audience like its competitors, having to settle for ninth place overall at an estimated $145,000 in player spending.

As many corners of the world continue to battle the pandemic, many will question whether Minecraft Earth shutting down will be the first of several location-based experiences.

While Pokemon GO managed to make $482 million in the US alone, the closest competitor was Jurrasic World: Alive from Ludia at just over $14 million. The game initially made $40 million globally within its first nine months of being live in 2019.

Descending further we have Harry Potter: Wizards Untie from Niantic and Warner Bros. which ranked third for biggest player spending in the US at $8 million. Set in the Wizarding World, the title has failed to capture the success of its Pocket Monster predecessor - something Warner Bros. will not take lightly, potentially making it one of the next heavy hitters that may disappear.

Five Nights at Freddy's AR surprisingly became a bit of a hit in the US at two million downloads, though revenue was not enough to crack the top three games on the market.

No doubt the ensuing months will be fascinating to see how many other firms commit to the location-based market or pull the plug entirely. Already, Next Games shifted the development of its Stranger Things mobile game away from the concept, with the only real game of note being the already announced The Witcher: Monster Slayer from CD Projekt. And it's fair to say, that studio will be looking for a win.

We previously spoke to Mojang executive producer Jessica Zahn, alongside representatives from Niantic and Ludia about how to make a location-based game in 2020.

Minecraft as a whole still performed extremely well, going on to earn itself the most views of any other video game on YouTube.