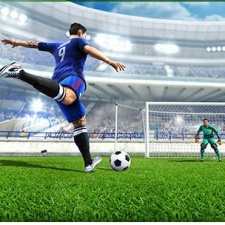 The latest social media platform to carve itself out a spot in the marketing mix is chat app Snapchat.

According to the recent AppsFlyer Performance Index, the platform has made “significant strides” in the app install marketing space.

For gaming specifically, the messaging app grew 36 per cent, while its share in the non-gaming app install space increased by 75 per cent for the latest six-month report.

One developer that took a stab at marketing to this audience is Miniclip, which ran kicked off a marketing campaign on Snapchat and other digital platforms for Football Strike during the week running up to the World Cup. Ran in partnership with Nest Performance, the aim was to target men aged between 18 to 44.

“We had some previous experience with Snapchat for other titles, hence it was in the frame for the World Cup campaigns, and gave us a chance to reach a unique demographic that aren’t necessarily reachable on other channels.

“The fact that the swipe up action that we want users to take on the ads in the app is the same action that they take in the game also meant it was a great fit for Football Strike.”

During the campaign, content was regularly updated with new iterations on the best performing concepts.

Ultimately it was found that for this campaign the best performing targeting was Lookalikes, with campaigns optimised using Delivery Insights to target Snapchat Lifestyle categories.

The marketing push resulted in more than 200,000 new installs for Football Strike, peaking at 10,000 daily installs at a $2.07 CPM. According to Burnham, the ROAS and CPI “exceeded the targets by a margin that enabled us to scale our daily volume considerably”.

Of course, Miniclip’s successful use of Snapchat may not translate to all developers, and Burnham has some tips on how to make the most of the platform and its audience.

“The number one piece of advice is to go bespoke on creative – it’s quite a creative sensitive channel and just resizing creative from other channels isn’t likely to work.,” says Burnham.

“The second piece of advice is to keep testing creative concepts until you find one that works, and then iterate based on that.”

When it comes to when to run a Snapchat marketing campaign, Burnham adds: “We have an always-on strategy for Snapchat now for a number of our titles, but the timing of campaigns is also important due to the messaging nature of the app – there’s naturally more traffic available during major events.

“For Football Strike we run regular in-game events and tournaments timed to fit with major holidays and events and so it makes sense to complement these with UA pushes.”