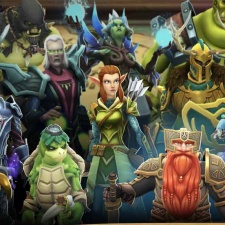 Craig Beers, vice president of product manangement at WIMO Games, details the development of the team's first game, RPG Dice: Heroes of Whitestone, and how the difficult decision to postpone leaving soft launch by three months ultimately led to the right way to release.

Where did the initial idea for RPG Dice: Heroes of Whitestone come from?

At WIMO Games, we believe in the power of collective creativity, and creating open meetings where anyone at the company can throw out an idea is one of the ways we harness that creativity – RPG Dice: Heroes of Whitestone started as a one-sentence idea in a group pitch meeting.

The whole team listened to the ideas, voted on which they were most excited by, and RPG Dice was one of the top ideas. From there, we did a more extensive pitch review, a paper prototype, and a playable prototype before deciding to move to full development.

The game was in development for a little over two years from when we started pre-production. We spent 15 months in soft launch because we wanted to make sure we had the experience really nailed down before going global.

Our core full-time team on RPG Dice is 18 people and we had contributions across our entire company. From central tech working on infrastructure, to marketing, artists from various teams helping, and companywide play tests, we had over 50 people who supported development in some way.

Balancing the urgency to get to market with the time it took to do it right. We originally planned to globally launch in October 2021, and we believe we had the feature set then to do it. When we sat down in the summer and looked at our timing, we felt waiting for January would give us that bit of extra polish and ensure we were not over stressing the team.

Deciding to go three extra months without revenue was not an easy decision to make. It felt incredible to go into our annual holiday shutdown with a polished game. Everyone got to rest up and bring great energy to the release week.

We got excited about the core concept right away. People were having a blast with the pen and paper prototype and players who tried the playable prototype on device aggressively messaged us asking when they could get the full game. Over the summer we really saw the systems of the game coming together. By around August-September, it felt like the core was there and we were really waiting on content completion.

We’re already executing on our plan for regular updates. We released a new event called Twilight Halls during February. We have a roadmap for additional event types, more PVP features, and expanded activities for Guilds. We also plan to add new heroes to the game to create new skill synergies. In between the major updates, we’ll mix in smaller updates based on player feedback, metrics performance, and bugs.

We’re very happy with RPG Dice’s launch so far. The team put a ton of passion into making a great game and we’re seeing that rewarded by players. Players are really enjoying the game as reflected in the emergence of a passionate community. From a business performance standpoint, the engagement, conversion and per-player metrics are exceeding our projections. It’s exciting to have a game with a solid foundation that we can now really work on growing over time.

Our top priority right now is continuing to grow RPG Dice. That said, we have another game finishing pre-production we are bullish on. Can’t tell you too much about it other than to say it’s in a completely different genre from RPG Dice. We believe in maintaining a robust development pipeline so we’re also working on multiple prototypes. Excited to share more about all those projects as they get further into development.