'Doctor Who was at the top of our list': Why Doctor Who: Legacy was a labour of love for Tiny Rebel Games 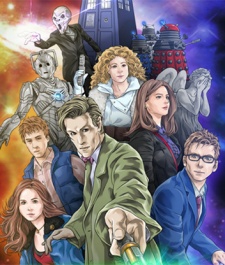 Is working with a big IP a curse or a blessing?

Undoubtedly, the game in question will receive a level of exposure that would otherwise remain firmly out of reach, but with that exposure comes an added level of pressure. Will the fans like it? Will the IP owner like it? Will I like it?

The 50th anniversary of British sci-fi smash Doctor Who brought with it the opportunity for developers to do the franchise justice.

We've already spoken to one studio that rose to the challenge  Big Ideas Digital launching a Doctor Who themed Say What You See release  but there was another outfit that was also keen to celebrate the Doc's big birthday.

We caught up with husband and wife team Lee and Susan Cummings of Tiny Rebel Games to find out what challenges they faced with Doctor Who: Legacy.

Pocket Gamer: How did the Doctor Who deal come about?

Lee Cummings: When we decided we wanted to create our first mobile game, we felt that the smartest move would be to work within the canon of a rich franchise that we love.

Considering the average development budget and schedule for a mobile game, it would just be completely unrealistic to try to create a rich universe like we required for this game, from scratch.

And we really felt that, to elevate this type of gameplay to the new level, it was necessary to ground it in the characters and narrative of such a universe.

Susan Cummings: Doctor Who was at the top of our list honestly. We're both massive fans, before we even started talking about Doctor Who we had both seen all of the "reboot" episodes twice, and Lee, being Welsh, grew up with the show as a child.

The BBC embraced our vision for the game from day one  they're gamers, they got it, they gave us the creative room to see it through and were nothing but additive to the process in every way.

LC: On the creative side, when Susan first told me that there was a serious possibility that we could make a Doctor Who game I started to think about what I loved about the franchise, and I realised very quickly that it wasn't just the epic adventures the Doctor can have using his access to the entirety of time and space, but the weight of history and canon which comes with each and every episode for Whovians all over the world.

There is this weight which comes with everything which happens, every line of dialogue. The latest Christmas episode, to non-Whovians, has an amount of importance because it always gets a huge amount of viewers, and lots of press.

For casual fans, they understand that it's a regeneration episode so it carries a lot of importance. For more hard core fans they realise that, in canon, the Doctor has a finite number of regenerations and hes come to the end of them.

So our first decisions were heavily driven by this weight of canon and history. This couldn't be just another adventure that the Doctor goes on with a companion or two.

The game started as a platform first, something extendable over time. Creation of 3D assets would have been impossible in this sort of framework - built for creation and release of new assets daily, as we did through December in our Advent Calendar promotion - so 2D it was.

From there Susan and I started to talk about the sorts of games we were itching to build. We have a folder of high level design pitches we felt didnt really exist, and we would love to play.

Years ago we created a puzzle game together called Puzzle Kingdoms with the always amazing Steve Fawkner, and we had been itching to do another.

A narratively driven puzzle game set in the Doctor Who universesounded amazing in our heads, but we spent the next eight months very worried that nobody else in the world would feel the same way.

The timing of the game's launch with the 50th anniversary must have served as a huge boost downloads wise...

SC: Yes, the one-two punch of the anniversary and then the Christmas special with Matt Smith's regeneration have both been very helpful to us.

Even with a major brand, getting discovered is never an easy task, but these opportunities have been very helpful to giving us an early edge.

How difficult is it working with such a well-established and now global IP? Is there much pressure?

LC: It would have been much harder had we not such a supportive partner in the BBC and the Doctor Who brand team. This isn't our first experience working with a major license so we're keenly aware of some of the pitfalls and potential issues with licensing partners.

In this case, we found a brand team that lives and breathes Doctor Who, whose feedback was always genuine and in the best interest of the franchise. And who play games themselves.

Every day we woke up with the knowledge that not only were we in a very lucky position to have access to one of our favorite universes, but burdened with the weight which came from knowing that this would likely be our only chance to make a Doctor Who game.

It makes it easy to get up in the mornings, but very hard to walk away from the level editor at night. To its massive credit, the BBC was behind the game 100 percent from day one, and have never backed off.

The pressure would have been many times worse if, during the last months of development - when we were working 18 hour days - the emails we were getting from the BBC were full of criticism and comment, rather than love and support.

Did you worry about the game solely appealing to Doctor Who fans?

SC: We set out from the beginning to make this a game that would be accessible to as wide an age range, gaming experience range, and Doctor Who knowledge-base as possible.

Sure, I think that there is a level of homage in the game that the non-Whovian would completely miss - enemy ability names, character familiarity, and other nods to fans - but just like the best entertainment, the experience can be reached on multiple levels.

There is a solidly designed gem matching and RPG experience to be had here for the same people who would play Puzzle & Dragons, Candy Crush Saga, Puzzle Quest, Bejewelled, but there is so much more to be found and experienced and noticed.

And we're particularly excited that we've had fan emails from people who have discovered Doctor Who through our game and are now working their way through the TV series.

What support did you get from the BBC when it came to promotion?

LC: The BBC has been working hard to help us get the word out to Doctor Who fans everywhere - particularly now that the team has seen how happy fans have been, by and large, who have been playing it.

I think it's keen to make sure that everyone who might want to know about it, does know about it, so we're working closely with the BBC's PR, social communications, and licensing team.

That said, this is not a BBC 'published' game - ultimately it's an indie game, independently funded, but of which it has been extremely supportive.

And, finally, are you sad to see the back of Matt Smith?

SC: I think the regenerations are all very sad, and this one was particularly so. Matt's a tremendously talented actor and made a brilliant Doctor.

That said, we're massive Peter Capaldi fans and can't wait to see him for more than the brief minute from the Christmas special.

Thanks to Lee and Susan for their time.