Disrupting kids education one iPad at a time 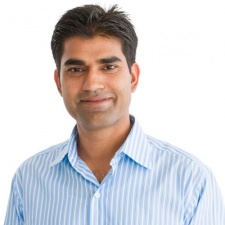 Five months on and much has changed.

For one thing, the company's just announced a $12 million Series A funding round, as well as the news Apple is selling its product in all its North American stores.

Oh, and pre-orders for the $79 peripheral and three game starter pack ($49 for backers) are now north of $2 million.

"I predicted our orders at this stage would be an order of magnitude smaller than they are."

Indeed, such as been the success of Osmo, which uses a simple clip-on mirror combined with the iPad's processing power and the company's computer vision smarts to enable kids to interact with the software by moving physical objects around in front of the iPad, that it had to redo its manufacturing tooling to meet demand.

Still, Sharma says he expects 2015 to be the year where the company really takes off.

"Our pre-orders are mainly from individuals. I think families are very sensitive to word-of-mouth recommendations so that takes time to grow," he says.

"We've also seen some bulk orders from schools, and we're testing in around 2,000 schools now, but it takes them more time."

Important in terms of gaining formal education buy-in is the ability to create custom learning programs, something the company is enabling with its online platform MyOsmo, whereby people can customise the existing Words software.

And, no doubt, this will be expanded in due course.

Yet, despite the success to-date, Sharma is keen not to forget the company's roots - not so long ago - in his garage.

"Despite the funding, we're currently 10 people focused on product and we don't expect to that change much," he says.

"It's about providing creative people with a great environment. Sure it's hard to find those people but we're not looking to staff up. We're looking to hire the right people."