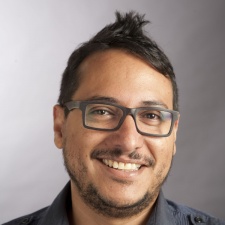 But now he's the GM/VP of product development at Bandai Namco Games America.

The Japanese-based company obviously has a strong history in gaming, but outside of Japan, its impact in mobile gaming is less solid - something Valadares is tasked with changing over the coming months and years.

In the meantime, though, we thought we'd fire over some questions about what we should be expecting in the near future.

Pocket Gamer: You've worked at a lot of big companies, so what's the attraction of Bandai Namco Mobile?

Jeferson Valaderes: Growing up in Brazil, we were exposed to a lot of Japanese TV and games. I always had a fascination with the culture, and being able to work with one of the bastions of that movement is a dream come true on a personal level.

From a professional level, what attracted me was the level of ambition that we share and the trust that they put in me to make the changes that need to be done for the company to be successful.

In addition, Japanese companies tend to think more in the long term, which is a refreshing change after spending pretty much my last 10 years working for American companies, which can be very short-term focused.

Japanese companies tend to think more in the long term, which is a refreshing change.

Japanese companies typically have a complex internal structure, so what parts of the business are you actually now involved with?

In our case, the complexity is more geographical. Japan and Europe work fairly independently from us.

We've been trying to get some more coordination going, and I'm making sure to go to the other offices to meet and greet everyone.

In terms of what you hope to achieve, can you provide some visibility in terms of your short-term and your long-terms goals?

On the product side, we're doubling down on recent releases, such as Outcast Odyssey, and we're also reviewing the plans for our upcoming releases to ensure they can be successful, doing small things like making sure they get proper soft-launch time, for instance.

For the support functions, we're really going through everything (marketing, customer support, community management) and making sure they are up to the task - even a great game will fail if it's not properly supported.

In the mid-to-long term, I want to keep building our internal teams in the Bay Area and in Bucharest so we can ensure we stay competitive with the other amazing teams out there.

There's a lot of talk currently about whether midcore mobile gaming is a thing, and more abstractly how to best balance monetisation and engagement. Do you have any views on these?

Although I come from a development background, I learned from the early days of mobile and social games that the things people want are not always what you as a veteran developer and gamer think they should be.

So, in my opinion, midcore is a thing whether we like it or not - there's clearly an audience for it.

I think the key as entertainment providers is to understand the factors that are behind the success of these types of games (accessibility, a strong sense of progress, for example) and build on that.

I'm a big believer in the idea that if you nail engagement, monetization will soon follow.

What mobile games are you currently playing and being impressed by?

Hmm, how many can I mention? The one I've been playing the longest is Godville - almost 4 years and counting. It's pretty much not a game, but it has this strange hold on me all the same.

I always have Candy Crush ready for the odd binge. I'm also having lots of fun with [ZeptoLab's]  King of Thieves!

What future titles from Bandai Namco Mobile should we be getting excited about?

We have lots of plans for Outcast Odyssey, and we have a few other exciting things in the hopper.