"Personally, I’m a big believer in doing what you really want to do. I draw the things I love for a living and I couldn’t imagine a better job" 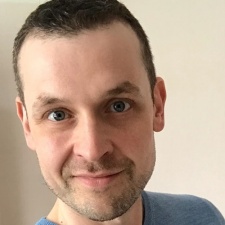 Laser Dog’s recent game Ava Airborne takes the endless runner genre and sets it in the sky. An endless flier, if you will.

It’s a simple quirk, but one that plays to the simplicity and calmness of the genre well, and with a suitably uplifting soundtrack to match, the experience becomes holistic.

With the title swooping into the app store recently, we took the opportunity to catch up with Simon Renshaw, co-founder of Laser Dog, to talk about Ava Airborne and life on the indie scene. You may recognise Laser Dog from the arcade tennis game Pktball or its survival horror title Alone.

Pocketgamer.biz: How did you get started as an indie games developer?

Simon Renshaw: The first game I co-designed (with my old design partner Mike Milner) was PUK. PUK is a super minimal action puzzler with a solid, tried and tested, pull back and release mechanic.

We managed to build up a little money in the design firm, enough to afford a good developer. Which is how I met Rob, the other half of Laser Dog.

So as a designer I typically try to find something I want to draw every day. That might include mocking up a new idea for a game Rob’s been prototyping, drawing new graphics for an update to an existing game, or more typically, some new elements for the game we currently have in production.

So as a designer I typically try to find something I want to draw every day.

As a designer, I think it’s really important to start by drawing things you really want to draw, delay the dull stuff for as long as possible!

Launch days! They are always tough. You may spend over a year on a single project, slowly running out of money, you put it out, a blog reviews it badly and it feels like a big old punch in the gut. This has happened to us almost every release (it’s very difficult to please everyone especially when you drift off the beaten track!).

Fortunately, we usually see a swell of good reviews soon after, but you never know and that is very scary. Then you hold your breath waiting for the launch weekend financial reports hoping the game has made enough for you to make the next! It’s exciting but tremendously stressful.

Personally, I’m a big believer in doing what you really want to do. I draw the things I love for a living and I couldn’t imagine a better job. To me, that is success.

I truly love my job, to the point where my friends might moan about their’s on a Friday night in the pub and I feel utterly awkward and cannot really contribute.

From an industry perspective, indie game development is like a lottery, success is managing to stay in the lottery for as long as you can and hopefully one day you’ll win.

We always focus on gameplay first and foremost but its increasingly difficult to do.

I think it’s a real shame that the shift from Premium to Freemium has been so dramatic over the last few years.

It’s quite sad that it seems to be pushing its way into the home console market too! A large portion of mobile game development now has to be focused on ‘how are we going to make people spend money to pay us’ where we’d prefer it to be ‘how can we cram in six new bosses and 20 vehicles.’

It’s a much higher risk for us indies and you need some serious retail and strategy brains involved if you want to make a successful freemium game.

A quick glance at the top revenue-generating mobile games highlights this to some degree. We always focus on gameplay first and foremost but its increasingly difficult to do.

Could you tell us about Ava Airborne?

Yeah, sure, Ava is a young girl who dreams of flying. She builds flying contraptions herself, testing them by jumping off a cliff and gliding as long as she can down the beach.

Don’t be too precious, especially if you are new, show people your idea really early and then you’ll never become overly attached.

Ava Airborne is an endless runner where you avoid obstacles floating in the sky. You collect different flying contraptions, some which completely change how you play the game.

One of the things that made Ava Airborne uplifting was the soundtrack – how important is a good soundtrack to a game and what kind of extra dimension can it give?

Music has always been really important to me in games. Rob writes all the music for our games, and he’s a genius! The music helps the player to feel the emotional connection between Ava and what’s happening in the game.

For example, if you leave Ava in an idle state, very relaxing ambient piano music will begin to play. However, when the gameplay starts, the music ramps up to a full orchestral suite, adding to the action.

The game features a day/night cycle and a weather system. The ambient sound and music adapt to what time of day it is and if it is raining for example. This all helps to really help the player engage and get lost in the game.

We’re working on some cool new updates for Ava which is our main focus at the moment.

We also have a new prototype on the go which we’re really excited about, the working title is ‘Cat Balls’ but that's all I can say at the moment!

We know exactly what it’s going to be, fast, nasty, raw! Think Doom meets Spelunky in 2D on crack. We just need a clear one to two years to make it!

Don’t be too precious, especially if you are new, show people your idea really early and then you’ll never become overly attached.

Find the nearest indie games group to you, we have Ga-Ma-Yo in Yorkshire and it is truly amazing and is full of the nicest ‘gaming people’ I’ve ever met.

You get some really great feedback showing your games in these situations and they don’t tend to hold back - especially after a drink! The bonus is that bad feedback is easier to accept too when you’ve also had a drink, just remember to make some notes on the train home.

Also, one of my favourite bits of advice is to be prepared to ‘chop your babies' heads off’. A big mistake we’ve made in the past is to invest a lot of time into a crap game trying desperately to make it work because you feel there’s something in it. Sometimes you just have to leave it. It’s crap, start something new!

Pay-to-Play: Why space-age thrill ride ALONE is a steal at $1.99