Jobs in Games: Dream Reality Interactive's Anna Hollinrake on how to get a job as a senior artist 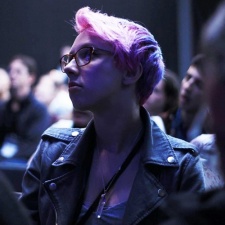 This time, the spotlight is on Dream Reality Interactive's senior artist and one of BAFTA's 2017 Breakthrough Brits Anna Hollinrake.

Alongside Dream Reality Interactive, chances are you may have seen Hollinrake's work in a number of places from Climax Studios' Lola and the Giant or Stainless Games' Magic: Duels or its Kaladesh, Eldritch Moon, Shadows Over Innistrad and Oath of the Gatewatch expansions.

PocketGamer.Biz: Can you tell us a bit about your current role and what it entails?

Anna Hollinrake: I'm a senior artist that has a hand in art direction, so I will basically shape the general look and feel of the game whilst still getting my hands dirty with concepting the look of the game, the mood of the levels and the props, assets, characters, and all the other bits in between.

Then, because I like far, far too many things, I tend to do a lot of the 3D building of assets too.

It also involves giving feedback to other artists and communicating with the client. There's a whole lot of different responsibilities.

I initially started out in a generalist trainee artist placement and then ricocheted around the country to different studios, with a whole lot of luck helping me out alongside that.

Around 16 I realised that people made games and that I could work on them too, given they were the vehicle in which I could make the art I most wanted to see.

The most significant moment that pushed me toward where I am now was probably my redundancy in 2016, in which Climax Studios scooped me up and almost immediately had me working on Lola and the Giant.

It was one of those beautiful moments of the planets aligning just right - my personal work slotted in perfectly with the project lead's vision and it really taught me just what an enthusiastic and engaged team is capable of.

As a result of my work on that I ended up receiving seniorship, as well as recognition through BAFTA's Breakthrough Brits program.

I was actually pretty single-minded about getting into games! Around 16 I realised that people made games and that I could work on them too, given they were the vehicle in which I could make the art I most wanted to see.

I made a plan and did a whole lot of research and eventually got in.

I studied Game Art at De Montfort University. It was really appealing because of their strict focus on artistic fundamentals - I'm a big believer in learning to artistically run before you can walk.

It's got an impressive alumni of students and has a wonderful community vibe.

I do, however, want to drive home that you can learn most (if not all) of what you learn on expensive degree courses online.

There's something delicious and intangible about focusing in on exactly what makes the game feel the way it does and how to communicate that as a whole.

The time to learn plus the network you get from it are invaluable, but it's perfectly possible to get into games without a degree.

No one ever asks for one, I promise.

Collaborating with others and finding 'the feeling' of the game.

There's something delicious and intangible about focusing in on exactly what makes the game feel the way it does and how to communicate that as a whole.

Worldbuilding is a huge one for me too - I love to create worlds that feel loved and lived in.

Whenever I get to dive into the nitty-gritty details of how the world works I'm happy.

For people getting into games? That it's particularly glamorous... it's still people sitting at desks getting cranky with their 3D software.

You will still have bad days (Maya crashed again and you lost your work), and boring days (UV mapping for 20 years), even though it's games.

It's an aspirational industry so I think a lot of people feel like they have to love every damn minute of it, but that's a whole lot of pressure to put on yourself.

For people on the outside? It's people trying to do their best with the time they have.

Art isn't going anywhere. You can take your time getting into the industry - it isn't a race.

It's frustrating for the devs, believe me. But please assume the best in the developers when things don't quite come out the way you expect - we're people too!

That taking time out is okay, Artists have a tendency to overwork themselves - just like anyone in a creative field - but constant productivity tends to lead to both not much getting done and also an awful lot of burnout.

Art isn't going anywhere. You can take your time getting into the industry - it isn't a race.

And if you need to take a break? Art will always be there when you come back.

Be a friendly, communicative human being.

Soft skills are vital for collaborating with designers and programmers, but they're often overlooked by artists that just want to study and improve their craft.

I say do both!