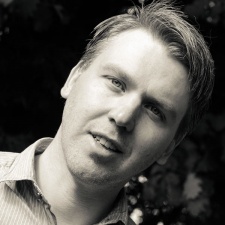 Simon Read’s New Star Soccer has always been a unique addition to the app store since it first surfaced on mobile in 2012.

There have always been football games on the platform due to their unavoidable popularity and an arcadey nature they possess that make them an exceptional fit for the medium.

New Star Soccer, however, offers an experience that covers not just the football, but the lifestyles of the professionals that play it. The title's entry onto the mobile scene in 2012 was a massive success and put its developer New Star Games on the map.

With the latest addition to the series, New Star Soccer Manager, players are no longer forging a player career but rather have been sent to the dugout as the gaffer, this time to keep the lads in line.

For this week's Indie Spotlight, we caught up with Read to find out more about his career in development, and the decision behind donning the suit in the new game.

Simon Read: Coding was always a hobby as a kid, and after leaving university I picked it up again, writing little football apps on the PC.

After launching New Star Soccer 3, I found that it was earning more than my day job did - actually I worked a night shift - so I took up indie development full-time.

Now that New Star Soccer Manager has been out for a few months, how do reflect on its launch?

It has been interesting. It hasn’t had the impact that New Star Soccer had on mobile, but then I didn’t expect lightning to strike twice!

I was determined to make the game as accessible as possible and bring a bit of light-hearted fun back to football management.

It’s a very different game and more niche, but the numbers are good, the customer ratings are great and we still have console versions in the pipeline.

What was the inspiration behind hanging up the virtual football boots and focusing on management?

I wanted to develop the NSS match engine further, setting player runs and so on, and found that it lent itself to a more tactical, management type of game, controlling the whole team, not just one player.

From there I was determined to make the game as accessible as possible and bring a bit of light-hearted fun back to football management.

What kind of challenges did developing the game throw up? Was there anything unexpected?

The game has seen countless iterations over the last few years.

Players weren’t originally represented on cards. It used to have a 2D match engine and an isometric home screen, then somewhere along the line we went fully 3D.

Getting the character faces right was a big challenge, but despite all of that it developed very naturally and there were never any time pressures to get the game finished, so we’ve created something that we are all very proud of.

What’s been some of your inspirations for the New Star Soccer series?

Where to start? Plenty of classic games such from the early days such as Player of the Year, Sensible Soccer and Championship Manager, but also the exploits of real-life football superstars themselves.

Have total belief, but never, ever bet your house on it.

I started writing the series at a time when David Beckham was reaching his peak and fans were becoming just as interested in footballers' lives as they were in the football itself.

It has become a bit of a bunfight, hasn’t it? The app stores feel like a very different place today than they did back in 2012 when New Star Soccer first launched on mobile, so I’m glad I got in when I did.

However, the same old challenge of creating something unique and original hasn’t changed, and it’s those games that tend to stick out.

What are your plans for the immediate and long-term future?

Currently we’re working on the console versions of New Star Soccer Manager, but personally, I’d like to do something non-sport related next.

Beyond that, I’m not sure. Write a novel maybe?

For the one man devs and small teams out there, I’d just say work with passion and work smart. Don’t worry about the details too much – just get it on screen and get it out there.

Then go again. Have total belief, but never, ever bet your house on it.