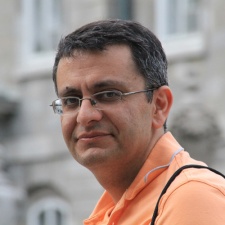 Vahdat is the founder and CEO of RiseAngle, Inc., a San Francisco-based company, with a vision of 'Shaping the Future of Immersive Games'. RiseAngle, Inc. is working on both VR and AR titles and has released four immersive games to the market so far.

Prior to RiseAngle, Inc., Vahdat was CMO of Cozymeal in San Francisco where he grew the company to a leading marketplace in the US. He has 10-plus years of online marketing experience in various industries and has helped a number of different companies grow significantly.

During 2003 to 2007, he founded and grew a successful game company that was later acquired.

Kaveh Vahdat: RiseAngle, Inc. is a leading immersive (AR/VR) games developer and publisher based in San Francisco with a vision of 'Shaping the Future of Immersive Games'.

I am the founder and CEO of RiseAngle, Inc. as well as a game designer and producer. As the founder, my work involves setting the vision and strategy, dealing with legal and accounting, hiring, fundraising, and continuous communication with stakeholders including investors, development and marketing teams.

As a member of the development team, I was the conceptual designer for the World of Mazes - Episode 1 as well as the producer of the game. Having the designer and producer being the same person is an unusual way of managing a game project, but being a lean start-up, we continuously rethink and rework well-established processes to find efficient ways that work fast with a limited budget.

I am an avid gamer and most passionate about the game industry. I have worked in different industries in various capacities and I love the unlimited possibilities for creativity in the games industry.

I also believe that there is a potential for creating games which by the time you are done playing them, you are a better person, and that's one of the things that inspires me.

Also as the size of the middle class in the world grows, entertainment industries as a whole and games industry to be more specific, will grow, so we are just in the early days of a massive industry with much more potential, and that's exciting.

There are some good and some not so good things about the game industry. On the plus side, it is not a winner-take-all industry yet, so anyone could be the creator of the next hit.

On the other hand, because of the fun nature of the industry, there are so many people who are in it without asking for much, and many of these self-taught people are very talented, and that makes it a super competitive industry.

So if you want to get into the game industry, my advice to you is to know why you want in and what you are getting yourself into, and if you decided to get in, learn as much as you, find a way to survive, and have fun!

Hyper-casual games explosion, the hype (rise and fall) around blockchain use in games, growth of mobile AR, and the introduction of standalone VR headsets were some of the interesting trends for me to follow.

Since we are in the VR/AR space, innovation in immersive games content, growth of technology in the sector including XR smart glasses, and customer adoption were the most interesting aspects for us to follow.

And I believe in the next 24 months, one of the XR/AR/VR devices will start an exponential mass consumer adoption with games as the most popular use case, and the investment interest in the category will rise again.

I first worked in the games industry during 2003 to 2007. Then worked for other industries and returned to the industry in 2016. Creating the games now is nothing like it was before. Developing games is much easier, less risky, and more streamlined thanks to game engines such as Unity and Unreal.

There are more platforms to publish for, hence more opportunities, but also much more competition. Mobile has been a phenomenon that changed everything about the game industry in the last decade and I believe VR/AR will do the same in the next decade.

I have been in a couple of the Connects events before, and Pitch and Match has proven to be very efficient for meeting interesting people, so I look forward to having the meetings this time as well. Also there are quite a few of the talks I am interested to attend, and finally I look forward to connect with the audience and hear their thoughts and questions about the business of AR/VR games in my talk.