"One of the things I love about the games industry is that no one really has a clue what is going on." 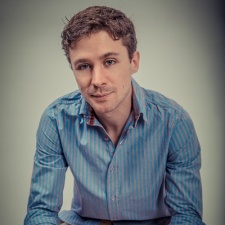 10 years ago, games-as-a-service wasn’t really a concept widely-used in the mobile games industry.

Releasing a game and then moving straight on to the next project was generally the preferred practice, rather than the idea of continually updating, adding and improving upon everything

Today, the mobile industry is dominated by games-as-a-service, with the biggest games thriving from this model.

Bristol-based Plague Inc. developer Ndemic Creations, founded by James Vaughan, was built upon the games-as-a-service model. Now seven years on, the studio is thriving due to the continued popularity of the game.

But even developers focused on live operations expand their horizons, and Ndemic released a follow-up to Plague in the shape of political/military simulation Rebel Inc.

As part of our Indie Spotlight series, we spoke with Vaughan about how he got started in games and got the lowdown on Ndemic's latest release.

James Vaughan: I started making Plague Inc. in my spare time as a hobby back in 2011.

When the game launched, it instantly became a huge success so I was able to quit my day job as a strategy consultant and focus full-time on Plague Inc., as well as slowly growing Ndemic Creations into a proper company.

Every day is different. When I was working on Rebel Inc. before it launched, I’d have a big list of things I wanted to tweak/improve and then make code changes.

If Plague Inc. made back its development costs of $5,000, that was a success for me. As it turned out it made its costs back in a few hours.

I would then play it to see how it feels and then tweak repeatedly until I was happy with it.

Finding good people to work with to do the stuff that I can’t. Currently, I’m really struggling to find a game designer to work with me.

I’m looking for someone with strategy/simulation experience who can make algorithmic simulation games like Plague Inc. and Rebel Inc.

With Plague Inc. I had very low expectations. If it made back its development costs of $5,000, that was a success for me.

As it turned out it made its costs back in a few hours. Now we are in the lucky position that we can work on games without financial constraints and are able to really focus on making the games that I want to play and which I can be proud of.

It’s absolutely brutal, especially on the paid side. Back when Plague Inc. launched the market was brutal too, but each year since it’s seemed to get infinitely harder.

Plague Inc. now has over 120 million players and this gives us a powerful weapon to use when releasing new games, though even with the support of Plague Inc. it’s tough.

Could you tell us about the studio’s most recent game?

Rebel Inc. is a unique and engaging political/military simulation that is heavily inspired by events in Afghanistan and sees players needing to stabilise a country ravaged by war.

At the start of Rebel Inc., the war is over but we all know that doesn’t mean anything. To stabilise the country, players need to balance military and civilian priorities to win the hearts and minds of the people, whilst also stopping a resurgent insurgent force from seizing power.

I’m really proud that just like Plague Inc., Rebel Inc. is getting a lot of interest from those involved in education, as they are finding it a useful tool to teach the complexities of counterinsurgency. I’ve even been invited to give a talk about the game at the Stockholm Forum on Peace and Development in a few weeks.

One of the things I love about the games industry is that no one really has a clue what is going on.

The project was fully funded in its first few hours of going live, and we’re excited to get this manufactured and out to backers in time for the holiday season. We’ve also got plans for more Rebel Inc. updates, with new maps and governors to play through and a PC version of the game too.

Anti-Vaxxers is something that we promised we’d bring to Plague Inc, so we’re working on that, and we have some other fun surprises we’ll be ready to reveal very soon.

We are in the lucky position where we have never had to worry about the budget when deciding what to work on, so I guess you could say we do have an unlimited budget.

Both Rebel Inc. and Plague Inc: The Board Game was ‘non-standard’ business decisions but I wanted to make them anyway. Going forward, I’m keen to keep making intelligent strategy/simulation games in a similar fashion to our existing games.

It’s really hard to give useful generic advice. One of the things I love about the games industry is that no one really has a clue what is going on. Everyone makes things up as they go and then suddenly some new game or genre pops out and surprises everyone. The following couple of things have worked well for me:

Make the game you want to play. I made Plague Inc. and Rebel Inc. because there aren’t any games like it on the App Store.

This meant I was automatically targeting a niche, I just didn’t know how big. It also meant I was extremely passionate about the game and I was my own target audience which made feedback easier.

If you get a hit, stick with it. It’s hard enough to get someone to install one of your apps - when they do, double down on it. Don’t make another game which you will have to fight to get them to install.

I know it’s tempting to go and work on something else after focusing hard on something, but fight it. If there’s an audience, keep your game alive.

One of the main reasons that Plague Inc. is still at the top of the charts after seven years is because we regularly update it with new content. Games-as-a-service is a really big thing.