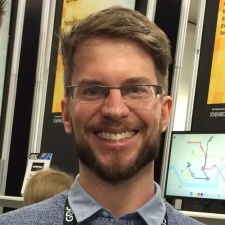 This week, we spoke to Dinosaur Polo Club co-founder and designer Robert Curry about Apple Arcade exclusive Mini Motorways and the challenges as life as an indie.

We'd heard a lot of pitches for game subscription services but this one was the first really compelling one that we knew we had to be a part of.

Robert Curry: I'd been in and out of the games industry since the early 2000s and by 2013 I found myself happily employed as a web/app developer while keeping game development as a hobby. My brother and I decided to spend a weekend competing in a Ludum Dare and ended up coming up the game that would become Mini Metro.

It was instantly compelling and even before the end of the weekend, we knew we'd be taking it further. The next year it got onto Steam Early Access and it just kept going from there.

I'm sure every indie says this, but there's not really a typical day. One day could include any number of things, such as: working on a map for Mini Motorways, testing the localisations, talking about new design ideas, scheduling job interviews, booking GDC meetings, working out specifications, talking to publishers about upcoming titles, responding to fan email or just doing a shopping run for the office.

For Dinosaur Polo Club the biggest challenge has been how to grow our team in a sustainable way. Our strength comes from our people and they're the most important part of the studio, so we're always looking for better ways to support them and we also spend a lot of time on our hiring processes.

Also, we're always conscious of our responsibility of giving each member of our team interesting work to do and creating opportunities for them to further their skills and careers.

Furthermore, something that we're always learning about is ideation. It's tough to decide what you want to work on next. We had quite a difficult time of this before we started on Mini Motorways. We were quite worried about this until we found out that it's okay, everyone struggles with this and we just need to be better about setting up a structure around it as well as setting expectations better.

Being able to keep making games that I want to make with a great team and in an enjoyable and sustainable way.

Like a lot of other segments of this industry right now we're in a transitional period. For the area that I know most about – premium - the last six months has been very volatile. We've been seeing declining revenues for a while now which hasn't gone unnoticed by the platform holders, and it's been great to see their responses via Apple Arcade and Google Play Pass.

Apple Arcade specifically has done a lot to rehabilitate the image of mobile games in the eyes of ‘core gamers’, so we may see more crossovers in the future between desktop, console and mobile - which I'm looking forward to. There is a drive for more content for these platforms too therefore there are real opportunities for indies who have a compelling pitch.

Could you tell us about Mini Motorways?

Apple has always been a very supportive partner and they really get what we're trying to do with games like Mini Metro. We were already in the early stages of development on Mini Motorways when they approached us to talk about their plans for Apple Arcade. Right from those early stages, it was a perfect fit.

We'd heard a lot of pitches for game subscription services but this one was the first really compelling one that we knew we had to be a part of.

We launched our last game Mini Metro on mobile back in 2016. That went really well for us but since then we'd been hearing from our friends running other studios about the general decline in premium revenues. Across the board, the trend has been that the money going to premium titles has been declining and we're being pushed out by the increasing sophistication of aggressively monetised free-to-play titles.

This wasn't going to stop us making games but before the Apple Arcade pitch we were discussing within the studio about maybe changing our focus away from mobile to desktop and console. So, when the opportunity to stay on mobile and continue making the types of games that we wanted to make came along, it wasn't a difficult call.

More Mini Motorways! We've got years of content lined up and the success of Apple Arcade has allowed us to grow the team to better keep up with our community's wishes. Right now, we're in the process of growing the team from nine people to 14.

Also, we're continuing to work on more content for Mini Metro and we have some exciting plans for new games. Nothing that I can share publicly yet sorry, we're still a long way off still!

Oooh, this is a bit of a trap! I imagine an unlimited budget and no constraints means you'd never release anything. I know this is a pretty boring answer but as we are very much focussed on processes and the how of making games here at Dinosaur Polo Club, I'd love to bring in more structure to better support the team.

So, things like an internal QA department, better resources for upskilling, internal workshops etcetera. We're already making the kinds of games that I enjoy making so that's taken care of, though I wouldn't mind being at a size where we can create multiple games at once as that allows people to jump between different projects at different stages to better suit them.