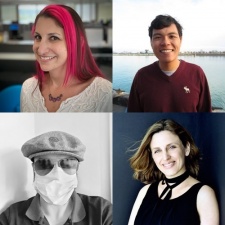 Jessica Zahn is an executive producer on Minecraft Earth at Mojang.

Maggy Larouche is a producer on Jurassic World Alive for Ludia

Odie Williamson is the developer on Orna: The GPS RPG

Five years ago, the notion of a location-based game was still very much an unknown concept. Ingress from Niantic gave players a brief glimpse of just what this sort of experience could achieve in 2013, but it wasn't until 2016 - and an ingenious partnership with The Pokémon Company - that the concept truly came alive.

More than four years on, plenty of developers have come and gone with various attempts to crack the hugely popular genre, yet only a certain number have managed to find their footing. As Fortnite leads and dictates the battle royale movement, Pokémon GO likewise does the same for location-based titles – ever closing on that once inconceivable $4 billion revenue mark.

This year has been different, though. 2020 has proven particularly difficult, with Covid-19 turning into a global pandemic which has resulted in much of the world being forced into lockdown and not able to leave their houses except for essential travel. Not exactly ideal for a genre that relies on movement to different destinations to function.

"We've had to rework many of Pokémon GO's features and systems to account for the limited ways people can safely travel in the midst of a pandemic," Niantic senior game designer Matt Ein tells PocketGamer.biz.

"It's important to us that Trainers can continue to enjoy Pokémon GO safely from wherever they are. For example, traditionally a Trainer would need to walk to a PokeStop to acquire Field Research, so to accommodate players, we shifted to providing a free Field Research task each day without the need to visit a PokeStop in the real world. These tasks ask players to complete actions that can be done from home.

"We've seen a great response to the changes we've made, but we are still closely monitoring the impact of Covid-19," he adds.

A similar response was given by Ludia producer Maggy Larouche, speaking on Jurassic World Alive.

"Players were playing every day much [more] extensively, so we increased the number of events to keep them engaged," she says.

"We've faced the same challenges most Microsoft employees have – figuring out adequate spaces to work in, bandwidth constraints, missing face to face contact – but a unique challenge for us has been ensuring everyone has access to the right hardware for development and testing.

Mojang executive producer Jessica Zahn for Minecraft Earth added that: "Sometimes you have a bug on a single device – and obviously not every developer will have access to every device in their home, the way they would in the office."

When the lockdown started, I wanted to promote a message of safety and make it easier to enjoy particular stay-at-home features more frequently

Of course, these developers have more access to bigger funds to help pivot in these unprecedented times, but what about when you're an independent? Interestingly, it seems a homogeneous strategy has been put into practice.

"When the lockdown started, I wanted to promote a message of safety and make it easier to enjoy particular stay-at-home features more frequently," says Cutlass developer Odie Williamson, speaking on Orna: The GPS RPG.

Williamson adds: "I introduced an ongoing event that reduced cooldowns and increased rewards for this Gauntlet, allowing players to get more out of playing at home while on quarantine. I also introduced the ability to build some buildings at home that would normally need to be found out in the world."

Since the beginning of 2020 alone, 21 games in the US that are classed under the 'Geolocation AR' category have generated over 18 million downloads and more than $212 million (via Sensor Tower). It's an impressive feat considering the unexpected challenges.

"At the beginning of the 'stay at home' orders, we saw a decline in play; when we released new features, we saw an increase in new and re-engaged players," says Zahn, pointing to new features such as adding Adventure Crystals into Minecraft Earth so players need not leave their homes.

"Then my daily installs actually started increasing! You could just tell there were more folk stuck at home looking for new sources of entertainment - and trying out new mobile games must have been one source."

In fact, mobile game downloads as a whole witnessed a rise of 75 per cent in Q1 2020 when compared to the previous year. This financial growth is only expected to grow, and within the location-based market, the four developers agree that the market is still on its way up.

"Yes, even in the midst of this pandemic, location-based mobile games can remain very successful," says Ein.

"For instance, millions of players purchased a ticket to Pokémon GO Fest this year, which was held virtually on a global basis for the first time. We adapted the content of GO Fest to account for the situation we're in, and Trainers responded very positively," he continues.

"It was a weekend filled with families walking - an average of nearly 15 KM per player - and catching Pokémon, bonding and sharing a fun experience, safely."

Williamson agrees, noting that: "A market and a player base is still there and I've been blessed with an amazing community that has been extremely passionate about classic RPGs, geolocation games, and/or both."

"Although my active player base did take quite an initial hit, a lot of players are returning, or finding ways to incorporate Orna into their fewer mobile lives."

The team behind Jurassic World Alive, on the other hand, is already putting preparations into place for after the pandemic's end.

"While we believe some player behaviour will change forever due to the pandemic, we also believe people will eventually increase their mobility and explore their worlds once again – in both reality and augmented reality."

According to Sensor Tower, Pokémon GO has generated $3.8 billion from 586 million downloads since its launch in July 2016. Jurassic World Alive - which released in March 2018 – has made $80 million made from its 20.8 million installs, while Orna: The GPS RPG 425,000 downloads has served up just under $600,000 in just over two years. Finally, Minecraft Earth has accumulated $444,000 from 15.2 million installs, though the game is still in beta.

So, what's the key to succeeding in this market for any newcomers? A well-known IP, the focus on live ops, a devoted community, regularly updated content, or all of the above?

"When designing location-based mobile gameplay, you need to consider that the real world is your game board," says Ein.

"This provides a great many opportunities to enhance a player's experience but it can also be a challenge, not normally encountered in traditional game development. For one, player safety is paramount. But if you factor that into your design, the location aspect can greatly enrich the game experience as you can create subtle, immersive experiences," he continues.

"Take for instance how in Pokémon GO, players encounter Water-type Pokémon more frequently when it's raining."

Zahn says: "My advice would be to consider what game elements you want players to have to yearn for – and how far out of reach you want to make those elements."

"I imagine creators of location-based mobile games both want to encourage people to be safe, but don't want to lose the sense of wonder and excitement you get from exploration. So how do you combine those two concepts safely?"

Safety seemingly is paramount, and is something that needs to be thought about all the way from the design phase to rollout. However, many questions will be raised once the pandemic eventually comes to an end. People will likely be more apprehensive to meet up and interact with their regular communities, never mind ones they never interacted with prior.

The world as a whole has changed, affecting anything and everything and has been a "huge reality check for creators in the geolocation gaming space," according to Williamson.

"A global pandemic feature set definitely wasn't top of mind when starting this project, and I know this is going to subconsciously influence my decisions in future projects," he says.

"I think there is going to be some industry apprehension towards utilising real-world abilities (specifically location-awareness) in our games for a little while after this, which is truly a shame. I still think there is a lot to explore in terms of mixed reality in mobile gaming and hope we can get back to that exploration when everyone is safe and healthy again."

Larouche believes there has been a "complete change of paradigm that will revolutionise how we play" over the next five to 10 years,

"Today, we consider VR and AR as two separate technologies, but with wearables getting more refined, such as the upcoming AR/VR glasses that will be launching in the next two years for Google and most likely Apple, you can expect real-world gaming to explode," she says.

"For the first time, you will truly be able to mix the virtual world and the real-world into one seamless gaming experience at a more accessible price, bring geolocation gaming to a whole new level. I truly believe this revolution has the potential to transform how we live and play in the same way that the intelligent phone transformed our daily lives."

"I'd like to imagine developers of location-based games will find creative ways to give players more control over their experiences and consider ways to equalize the playing field," Zahn tell us.

"Depending on the game, of course. But if a player happens to live near a location that has many points of interest, their experience might be better than someone who doesn't. It would be awesome if we figure out ways to reward location-based exploration without punishing those with limited mobility for any reason."

For Ein, it's up to developers to pay "even more attention to the state of the world" as well as coping with the demanding balance between remote and in-person gameplay.

"We're certainly still learning and adapting to the world each and every day, but we hope all of our players continue to enjoy our games as we strive to make the best experiences possible," he says.

Although, the Pokémon GO dev does acknowledge that: "As Covid-19 has shown, sometimes a massive global challenge can arise that can disrupt even the best-made plans."