"As challenges go, I don't think you can get much bigger than Covid-19" 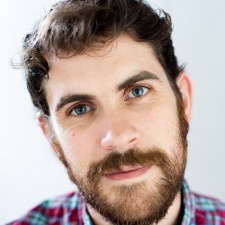 Sean Murray is the managing director of Hello Games, best known for the Joe Danger series and No Man's Sky.

Hello Games is a studio known across the video games industry for a variety of reasons. Beginning with the side-scrolling Joe Danger series, the Guilford-based developer then turned its attention to the ambitious No Man's Sky, a game that went through an incredible journey of fall and redemption like no other.

Now, after six years away from the mobile platform, Hello Games returns with a new story-based puzzle project, The Last Campfire. The game has been described by managing director Sean Murray as a "game about empathy and hope in a hopeless world is the game we all need now," something the studio knows well following its previous release.

More literally, the story of The Last Campfire is about a lost ember that is trapped in a puzzling place, searching for any means of making its way home. The game took just over a year and was created by three employees, while the other 23 members of the studio focused on support for No Man's Sky and plans for what comes next.

Of course, this past year has been unlike any in recent history, so naturally, there were some complications.

As challenges go, I don't think you can get much bigger than Covid-19

"There's always development challenges to overcome when trying to make anything as a small team, but as challenges go, I don't think you can get much bigger than Covid-19," Murray tells PocketGamer.biz.

"As a creative endeavour, making games is hard enough, but those challenges are magnified when viewed through the prism of virtual working.

"Live service games with teams who have been working together for years and have established pipelines, procedures, and are creatively more established can just about get away with it," he continues.

"Creating something brand new in a virtual environment is a whole other ball-game. Oh, and Stevie, our lead designer had a baby a month out from shipping. That was exciting too!"

While garnering a community via Joe Danger, Hello Games then shot for the stars with galaxy explorer No Man's Sky. Now, The Last Campfire has seen studio return to Earth in a similar vein to its early releases. But the question is, what was the decision to scale back and focus on a smaller title and would the studio consider attempting a game of No Man's Sky magnitude in the future?

"With The Last Campfire, we wanted to provide an outlet for members of the team within the studio to realise their creative ideas and give them a chance to work on something brand new and to experience the emotional rollercoaster ride of conceiving of, developing, and shipping a game," says Murray.

"With its procedurally generated universe, No Man's Sky is a vast and ambitious technical endeavour, while The Last Campfire is a more hand-crafted and intimate project, and it has been really nice to go back to that style of development."

Subsequently, Murray confirmed the studio's next "ambitious" project (via Polygon) is already underway. Whether or not this makes it to mobile is up for debate, however the platform is very much still in the studio's plans for the future.

"The team behind The Last Campfire have really enjoyed developing for the suite of iOS touch-screen devices in particular and, ever since their work on Joe Danger, have always appreciated the meaningful gameplay benefits that they bring, that physical connection to the world you're inhabiting," says Murray.

The Last Campfire is a game about hope and rekindling hope in a hopeless world, and who doesn't need a bit of that right now

"I would be surprised if mobile platforms didn't figure in their thoughts for their next project."

Meanwhile, on August 27th, The Last Campfire released across Apple Arcade, Nintendo Switch, and other platforms. When early talks for the game began nearly five years ago, Hello Games had no idea of what this year could look like, though this period still felt the right time to launch.

"At its heart, The Last Campfire is a game about hope and rekindling hope in a hopeless world, and who doesn't need a bit of that right now," Murray says.

"Apple Arcade's portfolio has grown into an amazingly broad selection of premium games which any platform would be envious of. Apple approached us about joining that catalogue several years ago now, and we have spent a long time making sure the experience on iOS devices feels extremely natural and native."

Before hitting that date, it was unclear whether the development would make it in time. So much so, that Murray confirmed it wasn't until the last "couple of weeks" that it all came together.

"A game like The Last Campfire only really comes together when all the pieces are in place: the visuals, the puzzles, the story, the narration, the music," he explains.

"So, it has been exciting but also nerve-racking seeing our release date approach and thinking/hoping all the ingredients are there for an affecting experience."

Now out the door, reception for the puzzler has been pretty positive. Our own sister-site PocketGamer.com even stated that The Last Campfire is "a joy to play" and is "worthy of your time", all contributing to a Gold Rating. While this is all well and good, for Hello Games it's all about getting the game to as many people as it can.

"We have been really thrilled with the reaction to the game so far," says Murray.

"People seem to be excited to get lost in the enchanting fantasy world they've seen in the trailers but I think the density of puzzles we've woven into the story will surprise them," he adds.

"We can't wait to see people's reactions as they get deeper into the world."