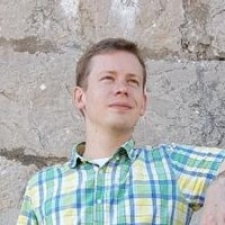 Today, we're speaking to Kevin Tarchenski from Rumor Games, who pitched Unnatural Disaster at The Digital Big Indie Pitch #3 (Mobile) in August and walked away as the champion.

Kevin Tarchenski: I'm Kevin Tarchenski and I founded Rumor Games coming up on 9 years ago now. I previously worked for Microsoft and Amazon Game Studios but struck out on my own to focus on creating more innovative and "indie"-style games. So now I wear all the hats: designer, developer, art, sound, business and marketing. I like to unwind with Animal Crossing or a good adventure game, but also draw a lot from my non-gaming interests like science and travel.

My wife Danielle also plays an important role. She's always there to support Rumor Games in conferences and expos, and she's the best person to bounce ideas off of and talk through tough problems. Plus she usually has the most say of anyone over the final outcome. I'll prototype a few things and then she gets to just stand over my shoulder like, "no, yes, no, the middle one's the best." You got it, boss.

Tell us about Unnatural Disaster that you pitched at the competition.

Unnatural Disaster is the anti-city-builder. You play as nature. A thriving sim city is your enemy. Use your arsenal of disasters - tornadoes, earthquakes, and more - to beat civilization into submission and restore balance to the world. Each of your disasters has a different effect, like how floods will damage a wide circle of buildings then recede, while tornadoes move in a straight(-ish) line and meteors are ideal for a precision strike.

You have a few other tools as well. Trees are your ammo; planting them generates the energy you need to deploy disasters (and also provides kindling for wildfires), and during the game, you unlock the ability to control the wind, which is useful for nudging fire and tornadoes in the direction you want them.

But it's not just wanton destruction. The scenarios get increasingly challenging and thought-provoking throughout the game, and the story is told through TV news broadcasts from the faceless denizens you're tormenting. Writing the overworked and beleaguered news reporter's dialogue was especially fun!

What do you think are the most unique and interesting aspects of Unnatural Disaster that gamers may never have seen before.

Everything in the game is procedurally generated, with unique maps and layouts for each player, even down to the names of the cities. But they aren't just one-and-done. As you play, you'll face off with your particular cities several times, and they start to get wise to your tricks. First, they'll level up with defences that counter your disasters. Lightning rods trap thunderstorms, wind turbines dissipate tornadoes, etc. Eventually, they build these "megastructures," which, without giving too much away, are essentially the boss battles of the game.

Your abilities are equally versatile, though. Power up your disasters by combining them - which is as easy as spawning them near one another, they'll automatically merge when close by. They can also be mixed in interesting and novel ways. A tornado that picks up fire will become a fire whirl and spread blazes downwind, while a rainstorm will turn it into a waterspout.

Oh, and every building in the game is destructible. The terrain is deformable. Meteors will leave craters that deny land for the city's development. Water is interactable too. An earthquake on land is just an earthquake, but an earthquake underwater can result in a devastating tsunami. It all adds up to interactions that are way more than the sum of their parts.

Unnatural Disaster is very unique in that it takes the city building genre and turns it completely on its head. What made you choose this gameplay, and what do you think you bring to it that may not have been seen before?

I played a lot of SimCity as a kid. And as I'm sure everyone has done, occasionally I'd save my game and then just wreck up my hard-built city for fun. It got me thinking about what an enjoyable mechanic that is, and how to flesh it out into a game in its own right. I'd never seen that done before, not like this.

So I got to building. One of the secret rules to a great indie game is to take an already compelling mechanic and explore it to its fullest, and this game certainly does that. Levelling up and combining disasters, their environmental effects, and so on. The hardest part was getting the difficulty level right. Being a vengeful god is fun, but there's no challenge if you're omnipotent. Figuring out the best ways for the cities to defend themselves and fight back was key.

How did you come to choose the platforms that you would develop Unnatural Disaster for?

Mobile was the right intersection of achievable scope for me as a solo indie, and platform strengths for the type of game I wanted to make. The touchscreen has always been appealing to me, and even today it still feels like there's untapped potential (pun intended) for it as an input method. And hardware limitations are basically a thing of the past now. There's a lot going on under the hood of Unnatural Disaster, from dynamic mesh generation/fracturing to terrain deformation to fluid simulation, and the fact that I can do that all, performantly, on a tiny rectangle that fits in your pocket? It's like magic.

I also just really love being on a platform that has literally the most diverse audience on the planet. I'll tell someone I just met about my job and then watch the progression from the spark of interest to them pulling out their own phone and downloading one of my games on the spot! That's pretty special.

Well, it's not easy. As a small studio, there's both a ton of work and a ton of luck involved with finding success. The former you can control, but the only way to account for the latter is to give yourself as many tries as possible.

To that end we made some tough choices, giving up our apartment in expensive Seattle to move to lower cost-of-living areas around the world in order to save money and extend our runway. Finding the right monetization is also a challenge. Getting to pick the brains to experts in that field was one of the big advantages of participating in the Big Indie Pitch for me.

Find people who give honest feedback. A supportive partner or friends can be great, but feedback is 10x more valuable from people who have no incentive to humour you. The bigger and more diverse your audience the better.

One of my favourite tips to keep up your motivation level is to take a video of your project regularly, like once a month or so. If you're feeling down about "not making progress," go back and watch them. It's a great way to put into perspective how far you've come.

It's a great way to focus on what's most important in my game. I get excited about Unnatural Disaster, so it's easy to go on about it. But the pitch lasts just 5 minutes. I had to jump right in with the pillars of my game, what makes it stand out, and highlight the most compelling parts. Which is coincidentally exactly what you need for good marketing! And on the subject of honest feedback, it's hard to beat a Shark Tank full of video game publishers.

I've done the Big Indie Pitch twice now, and meeting the other developers in the waiting room was a highlight both times. The first time we ended up introduced to a bunch of devs we didn't know right in our own backyard. The second became an impromptu game trailer review, with everyone sharing their videos and suggesting improvements. It was really insightful!

Pitching definitely taught me to focus on the key aspects of the game and to simplify my talking points. People usually see Unnatural Disaster and get the appeal right away, but they want to know the idea has legs. And it does! Showing off the challenges and puzzles later in the game takes it up another notch from an interesting concept to a fully-realized product. Mostly I just want to keep doing what I'm doing, learning every day and making cool stuff.

First priority is finishing and publishing Unnatural Disaster this year, which we're on track to accomplish. I plan on supporting it with new features and content and eventually adding support for more platforms. PC is a great fit already, and since I grew up on Nintendo it's a dream of mine to one day see my games on consoles like the Switch.

As for other future projects, I always have more ideas than time. Many of my games pre-Unnatural Disaster have been space-themed, which is a passion of mine. I could definitely see myself gravitating to that space again in the future!

The Big Indie interviews: IDEA Games tells us about making a new kind of word game in OtherWordly