The adventure of developing Slash Quest for Apple Arcade 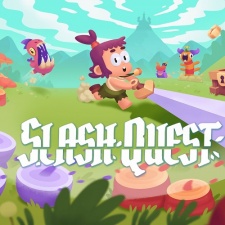 This week, we spoke to Big Green Pillow art director and co-founder André Rodrigues regarding the development of Slash Quest for Apple Arcade.

PocketGamer.biz: Can you start off by telling us about Slash Quest?

André Rodrigues: Slash Quest is an action-adventure game where the sword is the protagonist, and the knight is along for the ride. You play as this unlikely duo: Swordie, the Queen’s talking sword, and Shep - short for Shepherd - an unassuming peasant who decides to help Swordie back to the castle after it mysteriously awakens alone in the far away grasslands. Oh, and Swordie grows longer with every creature it kills.

As much as I loved the talent everyone brought to the project, expanding the team was a big challenge to overcome...

Slash Quest was born in a game jam called Ludum Dare back in late 2015 when Big Green Pillow teamed up with Mother Gaia and the mysterious Breakmaster Cylinder to create a game under the themes "two buttons" and "growing".

After that, it was years of weekends and late nights slowly chipping away at a demo, which became easier when Mother Gaia and Big Green Pillow started sharing an office in 2017.
It wasn’t until late 2018 that we joined forces with Noodlecake and Apple Arcade and several months later... here we are!

The project was in slow cooking mode from 2016 to 2019 while we focused on other projects, so we only worked off-hours and weekends on what would become the demo we pitched to Noodlecake.

We jumped into full-time development in 2019, and the team fluctuated between four and 12 people depending on the stage of development. Many of those 12 were contractors working part-time.

As much as I loved the talent everyone brought to the project, expanding the team was a big challenge to overcome, especially when it comes to keeping everyone on the same page about the game’s vision and feel.

From the very first game jam prototype we knew we had something. We were surprised at how well the “ever-growing sword” mechanic played out and how the demo was well received. I think slapping a face on the sword really did, too.

We always liked how the game plays on mobile, but I don’t think Slash Quest would have a spot in the mobile market if it wasn’t for Apple Arcade. At this time, in this platform, we have an ecosystem where a game of our scope and format can find its audience and thrive financially without compromising the team's vision, which doesn’t happen every day on mobile.

We always liked how the game plays on mobile, but I don’t think Slash Quest would have a spot in the mobile market if it wasn’t for Apple Arcade.

Like many indie teams with a demo in their hands, we were on a pitching spree looking for someone to help us make this game for real. Noodlecake became interested in the project and we were flirting for a while trying to make things work when they came up with the idea of putting it on Apple Arcade. I fully credit Noodlecake with having a very good relationship with Apple and getting us a chance to pitch them our weird idea.

Technically it is a 12 plus game mostly played in North America and Europe. However, digging a little deeper, I’d say Slash Quest’s core fans are usually folks in their 20s or 30s who love cartoons and have played enough action-adventure video games to be craving something novel at this point.

If anything, work has been a welcome vacation from every other aspect of being a Brazilian in 2020. Being a mostly remote studio for about two years, we were relatively prepared to stay productive during work from home times and, to be honest, having the shared goal of completing and releasing a project helped the team stay sane and healthy.

We are! As expected from an Apple Arcade title we didn’t break far out of the platform’s cultural bubble, but the game has been well received and is consistently finding its niche in the Apple Arcade audience. We were met with a very positive and understanding public who’s been instrumental in helping us figure out how to better support the game.

We’re hard at work on the first content update, which includes two new mini arcade games and should be out pretty soon. The game’s pretty beefy, but super engaged players can still hit a content ceiling after a while, one of our goals is to mitigate that and extend the player’s experience beyond the main campaign.

We’re still putting a lot of work into Slash Quest, the game’s not going anywhere so soon. Aside from that, we’ve been dabbling with a few prototypes for a new thing, but it’s too soon to know where that road will take us.

Matthew Forde is the features editor for PocketGamer.biz and also a member of the Pocket Gamer Podcast. You can find him on Twitter @Forde999 talking about stats, data and everything pop culture related - particularly superheroes.

Making Of: How Ubisoft shrunk down Rayman for Apple Arcade