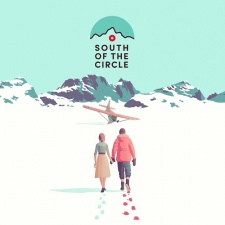 This week, we spoke to State of Play Games co-founder Luke Whittaker regarding the development of South of the Circle on Apple Arcade, and how a trip to Antarctica helped to bring authenticity.

PocketGamer.biz: Can you start off by telling us about South of the Circle?

Luke Whittaker: South of the Circle is a narrative adventure set in Antarctica in the 1960s, the height of the Cold War. It tells the story of Peter, a Cambridge academic who finds himself fighting for survival after a plane crash. Crossing desolate terrain to reach British, Norwegian and Soviet Antarctic bases, Peter flashes back to his life at the university and his relationship with a fellow lecturer, Clara.

We've been able to work with some incredible actors, including Gwilym Lee from Bohemian Rhapsody, Olivia Vinall from Roadkill and Anton Lesser from Game of Thrones...

Performances have been fully motion-captured and as you move through the game the story is told through immersive conversations, where responses are based upon Peter’s emotional reaction chosen by the player. We've been able to work with some incredible actors, including Gwilym Lee from Bohemian Rhapsody, Olivia Vinall from Roadkill and Anton Lesser from Game of Thrones, with their performances really making the story powerful.

The game is based on an idea I had around six years ago, after being inspired by Michael Chabon’s book The Amazing Adventures of Kavalier and Klay, which included a passage where the main character has a gut-wrenching decision to make in Antarctica, posing a question which gets to the heart of what it means to be human. I turned my idea into a very short interactive story, and then after a lot of research into a novel, which helped develop the themes.

The game was initially going to be set in the 1920s or 1930s when technology was limited and pioneers were exploring ever deeper into the continent, which made for an interesting tension. But then our co-founder Katherine discovered that her friend's father had been posted to Antarctica in the 1960s and went on to become head of the British Antarctic Survey.

We spent hours interviewing him and realised that the 1960s was even more fascinating time in Antarctica. The land was contested, the Cold War was on, and technology was almost as primitive as it was decades before; they were still using Morse Code and rifles from World War one to hunt. Some of the stories John told us, including one of surviving a plane crash, and his incredible collection of slide film he gave us access to, inspiring stories we tell in the game.

South of the Circle's style was taken from screen prints of the time – including your own grandfather's – can you expand upon this?

The style needed to be evocative of the mid-century period, suited to when the game was set. I was researching illustration of the period and I’d been working on some of my own designs when I discovered some of my grandfather’s screenprints. There were images of boats, boathouses, seaside promenades and beach huts, all composed with a designer’s eye for symmetry and balance.

It was fascinating and quite emotional to discover that we shared a similar eye for composition and colour. He died when I was young so I can’t have learned this directly from him, it made me wonder if it was something innate, something he’s handed down without knowing it. We both seem to look for the most pleasing graphic composition. I realised I do this in real life too, moving myself into position to line objects up of frame them symmetrically so they feel right.

I do screen printing myself. I inherited his screen-printing bed and the style seemed to be one which was evocative of the period and one I enjoyed working with, limiting the colour palette to focus the eye on what’s important and creating a bold, graphic final image.

To work with this style digitally I worked on concept art in 2D first, digitally illustrating scenes with graphic shapes, just as I would when making a print, in a style I believed we could replicate in 3D. With the huge number of scenes, we had planned for this game we also worked with the brilliant Catherine Unger.

Tell us about the trip to Antarctica to research for the game?

We knew early on that simply researching this via Google Images was not going to cut it. It was essential for us to get as close to the heart of what it was like as possible. The stories on which this is based are authentic, the characters are authentic and Antarctica was going to be almost a character in itself. It felt right to make the setting as authentic as possible too, and we were going to have to go there to make that happen.

In 2018 we lucky enough to travel to Antarctica with John Dudeney as a scientific advisor. We were on board a ship which travelled around the coast and we could make frequent landings to explore inland.

The stories on which this is based are authentic, the characters are authentic and Antarctica was going to be almost a character in itself.

There are still huts from the 1960s standing there. We were lucky enough to see these things emerging from the mist and explore sunken volcano craters where the ground isn't ice but black ash you can sink into. All these things ended up inspiring moments in the game.

We took a raft of photographs and videos and made drawings and paintings to record the experience. We also hand-made and monoprints, made by pressing a plate covered with black ink onto paper. Again, having that hands-on interpretation of the world was really important to us.

That initial idea was sparked almost seven years ago, soon after we launched Lumino City, but it wasn't until we'd released INKS and KAMI 2, over which time I was writing ideas doing small experiments, that the idea had developed to a stage where we really wanted to push into full production. So, in answer to the question, it's somewhere between three and seven years.

There was a core of around five people working on the game throughout. George Batchelor has been technical director throughout and we were joined along the way by various talented people to make this happen. In the end, you'll see dozens of people in the credits, we worked with Audiomotion for motion capture, for example, had some wonderful script advisors, talented, developers and 3D artists like Clare Warren join us along the way.

Bringing together the vision was the biggest challenge when working with new technology and developing our own tools and ways of working. It was an ambitious project involving a lot of different processes, where everything needed to be done right at every stage to make everything really sing, from script development to motion-capture, to gameplay and graphics programming to polish.

There wasn't one big moment, but many moments of delight throughout the project when something magical happened. Like the first time we got Peter to walk through deep snow and we gathered around the screen, amazed at the fact he has only four colours and yet at that moment looked photo-real. Then when we got the rough footage back from motion capture shoots and felt how powerful the acting was.

And yet in isolation, these things were only pointers towards the fact that this could be amazing. Each was dependent on the other, so Peter's trudging walk was only meaningful if that acting felt real, and if the music and sound design were going to enhance it and if the colours were going to work, and so on and so on... With narrative games like this, it's not until later on when you can really work on polish that it all begins to slot together.

We have had wonderful success on mobile and feel like the audience is out there for this kind of experience. So many people are now used to experiencing longer-form narratives on streaming services like Netflix and on their mobile devices too. South of the Circle can be thought of in the same way, as a mature narrative which you live through on your device.

We had all worked remotely at times before Covid-19 hit, and in fact for the previous three
months George our lead developer had been working remotely from Montreal, so it didn't come as a total shock to begin full-time remote work.

I think we were fortunate in that way, that it happened at a stage where we'd already done our mo-cap shoots and it didn't have any major impact on final development.

We're delighted with the reception the game has had, players have been calling it their game of the year and citing it as the reason to subscribe to Apple Arcade.

Most important to us, it seems to have connected with people emotionally, they've seen elements of themselves in the game or considered decisions they've made in their lives. And that means a lot, that this game means something outside its own world, it means something to us as people.

We have some ideas. But there's still a lot more to talk about and show of South of the Circle and we'll be happy showing this to the world for a while, allowing these other ideas to develop until we're ready to dive into the next big thing.