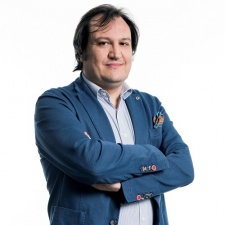 So welcome to the Indie Spotlight, where on a semi-regular basis a developer will tell us about their life and work, as well as the many challenges facing indie developers in the modern mobile and handheld market.

This week, we spoke to MixedBag CEO and creative director Mauro Fanelli surrounding the creation of the studio and the launch of Apple Arcade exclusive Secret Oops.

Mauro Fanelli: I’ve been playing video games since the early 80s and I actually started working in the industry first as a video game journalist in 1997, before turning to full-time indie development in 2011. Back then we saw a huge opportunity especially on mobile, so we started developing our first game, the action-adventure title Forma.8.

The market is huge and there are so many games that it’s always difficult to understand if your game will be successful.

As a small indie studio, it really depends on what we’re currently working on. If we are in full production on a game, we have a well-defined schedule of what the team has to do. Right now we’re experimenting on new concepts and ideas, so our schedule is a bit more relaxed and we’re experimenting a lot.

I think the biggest challenge is finding an audience for your games. The market is huge and there are so many games that it’s always difficult to understand if your game will be successful.

Considering the time and the budget that it takes to develop a game, this is something that always scares me: is this game, this idea good enough? Will it find an audience?

There are many definitions of success. For us, success is making the game that we really want to work on with the right budget and creative freedom.

The mobile market has always been tough for indie developers, but at the same time, it's full of opportunities. You can experiment a lot on mobile, using unconventional control systems for example, and you can put your game in front of a potentially massive audience easily.

While commercially difficult, I think mobile is one of the more exciting platforms to work on, with models like Apple Arcade offering new business opportunities to developers.

Could you tell us about your Secret Oops, and why it felt right for mobile?

Secret Oops is quite a unique game and a huge departure from our previous titles. It's a multiplayer game that is best experienced in Augmented Reality. In the beginning, we pitched Secret Oops as a PlayLink game to PlayStation, using the phones/tablet to indirectly control the action.

At the beginning we pitched Secret Oops as a PlayLink game to PlayStation, using the phones/tablet to indirectly control the action.

AR technology was progressing very fast back then and we were fascinated by the shared experience capabilities offered by ARKit 2. So we decided to revise the gameplay and focus on offering the best multiplayer, shared space AR experience possible using the latest technologies. With that, Secret Oops is something possible only on devices with very advanced AR capabilities, so it’s perfect for mobile.

We’ve always been in close touch with Apple since we launched all our previous games on iOS. We’ve been contacted before Apple Arcade was announced and we had the opportunity to pitch Secret Oops - originally called Spy as a project name. Apple liked our idea and we got accepted into the program.

It’s been a huge opportunity for us, especially considering that Secret Oops is such a unique game with Augmented Reality as its primary focus.

Covid-19 definitely had an impact last year; the team was used to working in an office so shifting to 100 per cent smart working was difficult in the beginning. Now we’re at concept/brainstorming/prototyping phase for new games, which again doing it remotely is very tough.

Luckily, we’re now back to work in the office after months of remote working. We’re a small studio and we have a lot of space. We’re progressing a lot faster now!

Currently, we’re exploring new concepts. It’s an exciting time since we have the opportunity to experiment with different ideas and technologies. We have a few promising prototypes and concepts at different stages, and we hope to move into full production soon.

A space opera with giant robots, inspired by old anime from the 70s and 80s with a bold narrative, lots of action and cooperative multiplayer! Maybe one day…

The best advice I can give is that making games is truly a massive effort, so make sure you are working on something you’re passionate about, however at the same has an audience and works from a commercial and financial point of view.