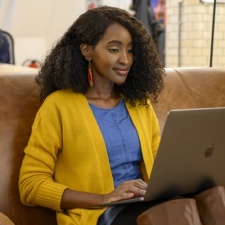 This week, we spoke to Wooga game writer Amanda Gicharu who detailed her journey from East Africa to Berlin, and why it's often that she will be the only Black person any of her colleagues have ever interacted with in games.

Amanda Gicharu: I’m a game writer on one of Wooga’s leading IPs. My day-to-day entails collaborating in a writer's room to craft the world, characters and plots of the game. Then working with other departments (game design, art, animation, programming etcetera.), my fellow writers and I meticulously weave serialised storylines into interactive gameplay, while keeping in mind the constraints of both the game’s mechanics and production schedule.

Growing up in East Africa with no existing local games industry at the time, I didn’t have any idea how I would achieve my aspirations.

Video game development was my childhood ambition. I enjoyed adventure games and RPGs, but I barely ever saw characters who looked like me represented. And when a small few were included, most depictions were harmful stereotypes or caricatures. Even back then, I wanted to do my part to help fix this and showcase the richness of my heritage.

However, growing up in East Africa with no existing local games industry at the time, I didn’t have any idea how I would achieve my aspirations. As a ‘career changer’, while getting here was a grueling journey, finally landing my dream job has been a source of excitement and a constant push to learn something new every day.

Games development teams comprise a myriad of roles from engineers and designers to artists and writers and more. If you’re not sure what role best fits you, the best place to begin would be researching the games production pipeline to pinpoint what discipline piques your interest.

While attending in-person industry events can be expensive for marginalised groups, the recent shift to online conferencing formats has provided more affordable or even cost-free opportunities to learn and network. Now it is possible to find people to help you understand the industry and how you could utilise your existing skills to get a job.

For aspiring game writers, in particular, a first step would be honing your creative writing craft through consistent practice. There are many free online tools available to help you self-learn the fundamentals of storytelling.

Narrative design and game writing are relatively new disciplines, so by the time I enrolled at university no courses in these areas were being offered. I studied journalism at a Bachelors's level and later attained a Masters in public communications.

While my education cultivated some skills that have served me well in my current role, ideally, I’d have liked to enrol in a hands-on program specifically geared towards using my writing and communications abilities in a creative context. More recently, I’ve completed several affordable certified courses on game development through MOOC platforms like Coursera and edX.

Hiring a diverse workforce is about more than just social parity, it directly contributes to the bottom line of a company. Multiple and varied voices have a wide range of experiences, and this can help generate new ideas about products, practices and markets.

Given this return on investment (ROI) potential, companies should be willing to make diversity and inclusion efforts a business priority by allocating tangible resources towards ensuring concrete progress is made.

I worked at one of the world’s largest technology companies before I joined the games industry. Then and now, I’ve observed that Black women in technology are extremely rare, with the presence of dark-skinned Black women being the rarest. The reasons for this are more complex than can be elaborated here, but the effects on me personally are feelings of loneliness and isolation.

I’ve observed that Black women in technology are extremely rare, with the presence of dark-skinned Black women being the rarest.

On one hand, there’s an unspoken pressure to hide certain parts of myself to blend in. But on the other hand, I know for many of my colleagues I’m the first and possibly only Black person they have ever interacted with. Thus, more often it feels like I’m the sole representation of a vastly diverse culture which puts even more pressure on me.

A lot of POC don’t even fathom a career in games as an option for them. They haven’t seen
anyone who looks like them among the prominent creators and veterans of the games industry. Without any role models as a source of inspiration, many don’t see a path into an industry that doesn’t include them.

Games companies can work with universities and community centres to find and encourage Black candidates and other People of Color through information sessions and mentorship schemes. They should also ensure that the teams carrying out these outreach programs should reflect the diversity they aim to attract.

While internships are one of the main ways to get into the industry because many of these placements are unpaid if you’re from a low-income background you probably can’t afford to work for free. To make these opportunities more accessible, companies should look at offering a fair wage and having a remote work option for those who can’t move to a new potentially more expensive city.

Recruiters need to examine how they define “diversity”. For a few years, this has been a much-discussed buzzword that only alludes to a particular kind of progress - increasing the number of white women in the game industry. This is commendable but it is just one of several areas in which the industry’s performance on diversity is falling short. Representation of POC remains low with Black people being the least represented by a large margin.

Research has shown that across industries POC, particularly Black people, report facing bias based on racial identity. One insidious way this manifests is in similarity bias when a decision-maker inadvertently selects a candidate based upon similarities to their own identity or behaviour.

When it plays out, if you’re a Black applicant being assessed by a white panel, your interview performance or resume may not matter. You might meet all the requirements but not be selected for a position because you don’t reflect the image your white interviewers are accustomed to seeing in that role.

One way to tackle similarity bias is utilising a more diverse interview panel, but this isn't possible in the case of a homogenous workforce. An alternate solution is bias training. However, studies have shown that just making people aware is not enough. For real systemic change, companies need to audit and de-bias all their processes, making structural modifications and implementing transparent, data-driven solutions to increase broader diversity and inclusion.

I have Black and POC friends who were encouraged to openly share honest accounts of their experiences with discrimination but months later have been pushed out of their companies for speaking up.

Last year’s BLM protests sparked conversations about racism and inequality that were long overdue, and not just in the US but across the globe. Companies issued solidarity statements and made pledges to help fund equity-related initiatives and work on increasing diversity and inclusion within their own organizations.

While some companies have started to make good on their pledges, still many more have returned to business as usual proving themselves to be nothing more than performative allies. I have Black and POC friends who were encouraged to openly share honest accounts of their experiences with discrimination but months later have been pushed out of their companies for speaking up.

While this hypocritical treatment is unsurprising, it is still profoundly disappointing. If you claim to be a true ally, your actions should match your words. Real change will take more than eight months and companies should be committed to that journey. Even if they are doing it for money, because diverse organisations do make more money, companies should sustain the momentum and follow through on their promises.

This may have been said before, but it is worth emphasising again - people will underestimate you but you need to focus on your craft and become the best practitioner you can be. Your learning and growth should never stop because games and technology are fast-moving so you have to be nimble enough to keep up.

Being a BIPOC, it may be more difficult and take longer to get recognised as a competent professional, but eventually, competence is the great equaliser. Being undeniably good at what you do builds respect and trust, helping people rethink their preconceptions of others who don’t fit the industry's typical mould. Then eventually there will be enough of us working in games to totally shatter that restrictive mould.