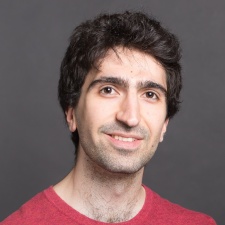 The Big Indie Pitch, a repeating special event run by the makers of PocketGamer.biz, sees indie developers engage in a rapid-fire pitching competition for fame and those sweet promotional packages.

The event gives indie developers five minutes to pitch their games to a panel of press, publishers, and industry pundits, each receiving invaluable feedback, before the judges pick three winners.

Today, we're speaking to Parham Sorooshian from Hamdo Games, the studio behind Our Last Halloween, which recently pitched at The Very Big Indie Pitch (Mobile Edition) at Pocket Gamer Connects London 2022 sponsored by Agora and Lion Studios, with additional support from Kwalee, and walked away as the runner-up.

PocketGamer.biz: Tell us a little about yourself and your indie studio – who is on the team, and what are their inspirations?

Parham Sorooshian: The team was made up of:

We're all currently studying at the National Film and Television School, each studying for a Master's in our respective fields. This is where we all met.

Can you tell us about Our Last Halloween that you pitched at the competition?

Our Last Halloween is a choice-based, anthology-style horror game that has you play as three teens attending a Halloween house party where they each encounter a different supernatural event. Playing as each of them in turn, you have to make choices and complete various minigames to learn more about the story and see if you can keep everyone alive until daybreak.

The gameplay was inspired by similar choice-based games like Until Dawn, Doki Doki Literature Club and Choices: Stories You Play, with minigames inspired by games such as Florence, and art by games and comics like Oxenfree and Scott Pilgrim.

What do you think are the most unique and interesting aspects of Our Last Halloween that players may never have seen before?

Unlike most mobile visual novel games, Our Last Halloween was designed to include several short, fun minigames, as well as a lot more original artwork than typically seen in these types of games. The former was important as adding these minigames would make the overall experience a lot more interactive and gamey, and would hopefully get the player more involved and invested in the narrative. And the latter because, personally, I always found the most appealing part of visual novels was the visual aspect, so I wanted to include artwork for wherever something interesting happened in the story, and where I, as the player, would want to see what was happening visually.

Our Last Halloween is a narrative-driven horror game. What made you choose this genre, and what do you think you bring to it that may not have been seen before?

Well, my two favourite kinds of games are horror games and narrative-driven games, so a combination of the two is just my ideal project to work on! In terms of originality, while there have been some mobile horror interactive novels in the past, I feel that the style, addition of minigames and the greater volume of artwork help to set it apart.

How did you come to choose the platforms that you would develop Our Last Halloween for?

The game itself was always envisioned as a mobile one - the way the mechanics and minigames were designed were made to work most effectively on a phone, but also (without spoiling anything) the story itself also ties into the platform and let me do some interesting and abstract things from a narrative perspective.

Very hard. Of course, every Indie developer's situation is different - personally, as Our Last Halloween is not the main full-time project that I'm working on currently, setting aside time to work on it in my own time is a struggle and requires a lot of discipline and time-management. As well as this, working on a game for long periods of time, especially when you aren't seeing immediate results can be demotivating, so it's important to keep the whole picture in mind.

Try to get involved with the Indie community, as this can be a great way to get advice and support as you work, as well as to re-energize yourself when you're losing your mind. Also, two great pieces of advice from an Indie friend of mine: firstly if you can find someone with whom your goals and visions align, working with another person is a great way to stay accountable and keep your project on schedule, and secondly, make sure you don't lose the other hobbies you have outside game development as those also go a long way into keeping you sane.

It was a lot of fun. Nerve-wracking of course, but a good experience and a great way to practice talking about your game and what makes it uniquely yours with people who have experience in the field already.

More than anything else, the experience was greatly motivational. Being in a room full of other Indie developers who were all passionate to discuss games with each other, swapping tips and advice was just a nice environment to be in, and one I hope to stay involved with in the future as much as possible.

In regards to Our Last Halloween, I will be continuing to work on it and hope to get Chapter 2 released by this summer, and chapter 3 by Halloween. I'm also working on a new game at the moment, a 3rd person over-the-shoulder horror/mystery set in a small town - that I will be revealing soon, so stay tuned for that.