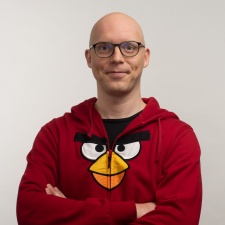 The headline has been amended to clarify Rovio's current approach to blockchain gaming: although Rovio has internal teams exploring games with blockchain functionality, Rovio has stated that it does not have a dedicated title in development.

Typically, interviews spool. The wheels turn slowly before you can hit the big topics, usually celebrating accomplishments before looking at challenges – especially as Rovio closed 2021 with a record Q4 period and saw the release of Angry Birds Journey. But Rovio CEO Alex Pelletier-Normand wanted to meet the singular event that overturned mobile gaming’s landscape in the past year: the post-IDFA world and Apple’s introduction of App Tracking Transparency (ATT).

“We were very comfortable with our strategy. Our brands have wide appeal, and although we had no new releases in Q4, it was the point we started scaling Angry Birds Journey, and our 2021 acquisition, Ruby Games, also performed strongly.

“But Apple’s privacy policy changed the market. Companies like Rovio are large enough to have people working in compensating to the new marketing environment but regardless, we prepared heavily, adjusting our processes and tooling, and so we went into this confident we had the right approach. But we didn’t know what to expect from ATT. Until it happened, it was hard to be sure we did everything we could.”

Although Google has committed to a similar course of privacy revamps, Pelletier-Normand is confident that Rovio’s current approach: “The different networks used to be very good at identifying which players would be valuable for your game – who would enjoy and, eventually, participate in IAPs. Now, they’re more of a blunt tool, which means part of your adaptation as a developer is making sure your game is now doing the job previously done by these networks.

We didn’t know what to expect from ATT. Until it happened, it was hard to be sure we did everything we could

“Games must now identify the types of players engaging and adapting what your game offers to each – what we call segmentation. Again, big brands and brands with wide appeal have an advantage with that.”

“In the current state of the industry, if you want to focus on games with very niche audiences, you’re going to have a hard time. We’ve ensured that Angry Birds was very inclusive from the start – we want everyone to play Angry Birds, rather than speak more directly to a particular part of the audience.”

Leaning on core franchises may seem somewhat old-fashioned in the ever-flowing and ever-disruptive mobile games industry, but this approach is informed by Rovio’s past experiments outside of the Angry Birds franchise, such as Darkfire Heroes, an action RPG no longer supported by Rovio, and Small Town Murders, a Match-Three murder mystery.

“At one point, we were really spread out. We tried to explore many genres, especially midcore, and we were all over the place. So, in 2020-21, we really focused on our casual games and Angry Birds games.

“The Darkfire team has pivoted towards something else. The quality of the title was very high, and we could have put in more effort trying to improve the metrics. But the market changed while we were working on Darkfire and, at the end of the day, and I don’t think the title corresponds with the direction the market is going in.”

Pelletier-Normand confirmed no internal Rovio staff is continuing work on Darkfire Heroes, and although Rovio has stopped all UA for Small Town Murders, the former has proven more promising.

At one point, we were really spread out. We tried to explore many genres, especially midcore, and we were all over the place.

“We really think we have something special, in terms of how we handle the action phase in Match-Three games, and the team has been working very actively and making great progress in the shadows since we stopped UA on Small Town Murders. This is a must-win battle for Rovio – we want to be one of the best companies in the world in Match-Three – so this is definitely something we are not abandoning.”

Just as unusual for mobile games companies is to have franchises with multiple blockbuster films and a 2022 Netflix animated series. The ubiquity of Angry Birds seems eternal, but Pelletier-Normand states that Rovio’s current brand strategy was revised in 2021. “This was when we really started to think about different partnerships.

“But we’re very picky with this. We wouldn’t give carte blanche to anyone. Angry Birds games are either co-developed or entirely internal, which previously wasn’t always the case but is so now. With shows or movies, we have to make sure the projects and our view of the franchise are aligned. We’re cognizant that we’re lucky to have an amazing brand to play with but it’s also essential we protect it.”

Anyone hoping for an adult crime series with Red as a catapulted-bird-turned-drug-dealer will be unenthused with Pelletier-Normand’s response: “That would be surprising.” At least he laughed.

Blockchain, NFTs, and the designer economy

Less of a laughing matter – at least, likely to those funnelling millions of dollars in attempts to take ownership of blockchain gaming in mobile – is how Rovio is exploring blockchain and NFTs. Unsurprisingly, Pelletier-Normand confirmed that Rovio has been exploring blockchain functionality in gaming long “before the current hype”, but stated that the current terminology does not align with the company’s direction.

We are very careful not to associate Angry Birds with technology or tools that are not necessarily considered sustainable at this point.

“We’re game makers. We craft games, we create joy. And the only reason we have thought about it is because we believe there is a way this can bring value that is not based on speculation but instead truly brings intrinsic value to the consumer. Games are used for more than play now. They’re social networks, and if you give players the tools to create something within these universes, it just creates additional value to everybody.

“So, we don’t call it blockchain, because that is a technical solution. We call it the designer economy. We’re trying to enable our players to be in an environment where they can interact, create, share, and even sell some of the things they’re making.”

Unlike the majority of blockchain gaming entities that are, currently, squarely targeting parties already committed and invested in blockchain and NFT initiatives, one might perceive Rovio’s dedicated pursuit for the casual market something of an obstacle. But Pelletier-Normand was keen to emphasise the distance between the company’s blockchain exploration and its core audience.

“The Angry Birds brand has to remain safe and approachable. It appeals to a younger audience. We are very careful not to associate it with technology or tools that are not necessarily considered sustainable at this point. I’m not saying there’s no value that can be brought to Angry Birds players, but we are in no rush to do this.

“Although our designer economy project is not using the Angry Birds brand, it certainly has wide appeal and is inclusive, and is a little more immersive than a casual game. We’re excited about it internally but we’re not ready to say too much about this title because we’re still in development.”