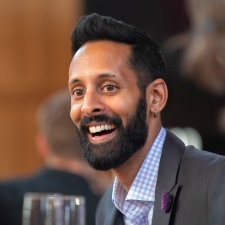 Zynga is celebrating Pride Month with a suite of in-game events and donating a total of $50,000 donations between Brave Space Alliance, the LGBT Foundation, and Gay Gaming Professionals, through its employee resource group (ERG), zPride.

But we know this story: multinational makes financial investment in advocacy and support groups without intrinsic and bespoke effort to truly combat prejudice, both internal and within the mobile games industry. As Dr Vijay Pendakur, Zynga vice president and chief of diversity, equity, and inclusion (DEI) said: “We’ve all witnessed organisations that want to perform the kind of facile side of diversity without investing in structural equity.

“It’s nice to think about diversity. It’s better to change your behaviour.”

But Pendakur thinks Zynga is an outlier. He spoke with PocketGamer.biz on joining the mobile behemoth, Zynga’s model for ensuring all voices throughout the company are heard, and balancing international efforts for equity in an unequal world.

Betting on the farm

Although Pendakur is a relative newcomer to Zynga, joining in 2020, he has been a profession authority in DEI for some years, including serving as student dean and presidential adviser on diversity and equity at Cornell University.

But his tenure at Zynga aligns with a seismic shift in the ways the global games industry thought of equity, as the resurgence of the Black Lives Matter movement cast an undeniable lens on racial inequality that would compel many in the games industry to introspection and action.

In the summer of 2020, much of the world saw a resurgent rise in activism around social justice and equity issues that have persisted

“In the summer of 2020, much of the world saw a resurgent rise in activism around social justice and equity issues that persisted. This is the cyclical activism tied to geopolitical events spurred by the murder of George Floyd.

“Zynga had a lot of momentum internally in DEI but the level of social agitation prompted to the company to really think about bringing in a subject expert and leader to formalise activity.”

Pendakur was brought in as to support the company’s DEI efforts, but his remit extends to university relations, learning and development, and social impact – a wider portfolio then one might expect. But he argued this is indicative of Zynga’s acute approach to DEI, one that is complementary and intersectional.

“Take university relations – essentially, our strategy for junior talent. We know that younger generations are more diverse and we know that this is increasingly important for anyone looking to join Zynga, so junior talent can also be a key driver for diversification.

“This alignment of functions is something that drew me to Zynga, and shows a breadth and depth of commitment that isn’t normal elsewhere.”

Data, diversity, and steering a different path to Activision Blizzard

Recently, Activision Blizzard received considerable backlash for the King-developed Diversity Space Tool, a means of measuring and quantifying character traits in an effort to combat unconscious bias. The tool was heavily lambasted, prompting Activision Blizzard to respond to criticism and state the tool was not being used in “active” game development, despite being deployed in the development of Overwatch 2.

It’s not the same, but Pendakur detailed how Zynga has pursued a data-driven approach to inclusivity, in an effort to solidify anecdotal claims.

“Zynga has moved into a metric-driven approach when thinking about diversity, rather than operating on anecdotes – ‘we think our employees are happy and psychologically safe’. That doesn’t produce data and insight to drive targeted tactics and campaigns.”

Under Pendakur, Zynga issued a global inclusion survey to measure “eight different inclusion factors across the company” to measure variables including psychological safety, trust in decision making, and perception of diversity. He continued: “These factors are key drivers for the kinds of cultures and flywheel effects that companies desire but don’t know how to produce.”

Although Pendakur was unable to share comprehensive data, he stated that subsequent responses to the benchmarking survey resulted in an increase in the company’s perception of diversity commitment.

However, when it comes to representation within Zynga’s games, Pendakur stated that the company deviates from its data-driven approach, and leans towards expert, lived-in experience and narratives.

Zynga has moved into a metric-driven approach when thinking about diversity, rather than operating on anecdotes [that don't] produce data or insight

“We have a firm that will direct assets and readings to an expert member of the community we’re trying to represent. But it’s not algorithmic or based on predictive modelling, but a human being from a community telling us their perspective.”

Speaking internationally, one at a time

The recipients of zPride’s donations are include the Brave Space Alliance, the first black-led, trans-led LGBTQ+ centre located in Chicago, to Gay Gaming Professionals, an international online community that also arranges scholarships for LGBTQ+ youth pursuing games careers, and the LGBT Foundation, a UK charity providing advice, support, and services for LGBTQ+ communities.

The LGBT Foundation is also, within some circles, a deeply controversial choice – in January 2022, the LGBT Foundation severed all ties to the EHRC (Equality and Human Rights Commission), a non-departmental public body that enforces non-discrimination laws in the UK, following the EHRC’s comments on conversion therapy and proposed Gender Recognition Act reforms that many saw as punitively discriminatory towards trans people.

When asked about how the LGBT Foundation was selected as a recipient of zPride’s donations, Pendakur noted: “They were chosen by the UK chapter of our LGBTQ ERG, ZPride. This was not a centrally directed partnership, but one employee-driven. We try to empower employees to operate with a level of autonomy that takes into account geographic variance.”

Pendakur detailed the significance ERGs held within Zynga, including an enhanced presence in internal development and representation, including within the company’s coaching programme. Pendakur is assertively positive about the role of ERGs within Zynga, and as representative of progressive structures within any company that is able to pair company-wide initiatives with bespoke, intimate and localised knowledge.

“When I looked at other gaming companies, particularly in the mobile space, I didn’t see an architecture of belonging – and, to me, I think of the prominence of ERGs within any organisation is a sign of that architecture.”

Any potential conflict between the LGBT Foundation’s suitability as a recipient of zPride’s donations showcases the perils of speaking to an uneven global landscape, where definitions of progressivity and cultural boundaries risk clashing with a company’s singular vision for acceptability. Pendakur is, reasonably, jovially slighted: “Saving the easy questions for the end.

“I don’t have a silver bullet. There is no perfect answer to the complexity of this question. But it is something for any global company in every market sector to seriously consider.

“What the women’s ERG does in Bangalore, India, may be very different to London or Toronto because of what is salient in their lived-in context. ERGs are often representative of local interests tied with local needs and the politics of any specific space. [But] a huge asset at Zynga is that we have an extraordinarily diverse and global employee base, and they drive a lot of our inclusion efforts in our games.”

Pendakur noted that Zynga’s teams are also able to lead on in-game activity, and contribute their more personalised knowledge and experiences.

“Take our Pride Month in-game activity: that’s organic. There is no top-down missive that instructs teams to include a Pride feature, that’s not the way Zynga works. Individual game teams, through passion and enthusiasm and represent the complexity of our global player bases, surfaces ideas for these features and subsequently run them.

“That’s one way we try to live our values but recognise the uneven topography of inclusion in the world.”

“The level of organic LGBTQ+ activity in the team structure was eye-opening – the number of people rallying in the Lesbian Canadians of Vancouver, British Columbia is amazing. There is a dynamic, productive tension between Zynga employees and Zynga players that is helping us navigate the murkiness of inclusion in a global context.”

No silver bullet, but PocketGamer.biz asked Pendakur whether there is a trans guild in Puzzle & Spells. There is, but we think he appreciated the slight shade.