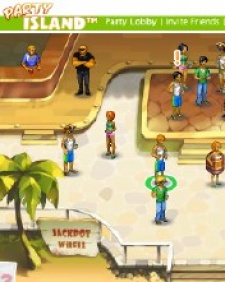 October 10th, 2008 - 04:00pm
By Rob Hearn, Managing Editor
Over the last couple of years, Digital Chocolate has been applying its perfectionist approach to mobile communities with DChoc Café, a series of games set in a consistent virtual environment where you can meet up with friends and hang out over a game of, well, anything it's possible to play on a table in a café. The series has made the move to Facebook during its short life, and its reception has been largely positive.

Forget DChoc Café. Put it from your mind. That series was just a prototype, a practice run for the real thing: Party Island, which debuted earlier this year on Facebook and has recently rolled out onto mobile.

We caught up with Product Manager Henric Suuronen  who also helmed the DChoc Café series  to see what Party Island's all about, and to find out why Digital Chocolate felt the need to add to its portfolio of community-based games.

Such as? "For one, it wasn't easy to see what your friends were up to, like it is in Facebook or Xbox Live. For another, it was difficult to chat. There was the message board, but this wasn't ideal for us. So in Party Island there are status updates and Party Chat to make it a smoother experience."

So it'll be possible to communicate in real-time with other players in the Party Island community. Does this have any implications for younger users  is there a greater risk they'll be exposed to profanity?

"Not really  with both DChoc Café and Party Island we use a very thorough profanity filter, with a database of around 10,000 words per language. Of course, there will always be the occasional determined user who finds a way around it, but we're pretty happy with the job it does."

And so what kept live chat from the DChoc Café series? "The main barrier was the operators. It was difficult to persuade them to carry a product that they see as a potential threat to SMS revenues." I see.

There are other striking differences between Cafe and Party Island, most notably that the latter appeared on Facebook first. "After creating Facebook applications from our existing IPs, we found some success with this audience," Henric told us. "At one time, Tower Bloxx was eighth overall. Given the community-oriented nature of Facebook, it made sense for us to start there and roll out to other platforms. Party Island is very much a cross-platform enterprise, including Facebook, Flash, and mobile."

Of course, starting out on Facebook does carry risks. Where's the guarantee that users will migrate from the big screen to the little one? "There are incentives to play the mobile version," Henric assured us. "For instance, if you sign up from Facebook you get a limited edition T-shirt for your avatar."

That's another difference. In Party Island, you can customise your avatar to a much greater degree. Dressing up, of course, carries with it an element of prestige, as does climbing the social ladder by means of the VIP Card system. This simple carrot-and-stick mechanic encourages you to win status  and associated privileges, like socialising in particular areas  by putting in the hours, completing challenges, and inviting friends to join the community.

To get from Green to Brown, for instance, you have to earn 2,000 credits, play the main party game, send a postcard, try the free trial, and synchronise your party. Reaching the ultimate status of Black VIP takes more than 100 hours of gameplay.

It's a canny way of keeping players in the game, but there's a danger that Digital Chocolate's attempt to retain users and promote viral marketing will prove more of a grind to players than an incentive.

We'll see. What's certain is that Digital Chocolate's determination to expand the network and push content will have benefits for players. For a start, the Party network itself is gratis, along with other goodies. "We're following the example of Gameloft," Henric said, "and giving away free demos."

What about aesthetics? Party Island is very different from the autumn-toned Café series. It's brighter, for a start, and not so relentlessly colour-coordinated. "We're pleased with how the environment looks and feels. The hotspots, which didn't work so well in the Café games, are much less confusing, and the whole thing looks a lot edgier now that we're out of the quite small café environment."

Leaving the café has other advantages beyond looks. Unlike its predecessor, Party Island isn't bound by its theme  it's not just cards and boardgames. The first dedicated title is Party Pool (excellent, incidentally) but there's room in the island's arcade for Digital Chocolate's back catalogue.
Bubble Popper Deluxe is coming this year, and you can probably bet on big franchises like Tower Bloxx and Mini-Golf appearing before too long. Playing the games, meanwhile, allows you to accumulate Gamerpoint-esque credits to spend on various items in the island community, as well as working your way towards high-status VIP cards.

It looks promising, addressing as it does the concerns many of us had about the overly restrictive, slightly sombre Café environment. Of course, most of the Café games did well critically. Digital Chocolate knows how to make a good game, and the company's first foray into social gaming suggests that it's got a pretty good idea about how to make one of those, too.

The second foray is looking to be the big one, though.