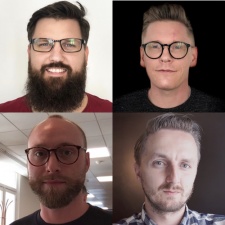 Jakob Braunisch (pictured, bottom-left) has been appointed as a new senior game designer at the firm. Possessing 10 years’ experience in the games industry, he has worked on several mobile titles for the likes of King and Activision Blizzard as well as conducting lectures surrounding game design at S4G School for Games.

Former Mamau and Miniklub developer Magnus Poppell (pictured, top-left) has made the move to Voodoo in the same role, where he will utilise his eight years of experience. Magnus previously was the owner and lead programmer of Kipper Digital.

Mads Peter Vedsten Larsen (pictured, top-right) has been hired as a new game designer, bringing along his 10 years of experience in development and art design. Formerly, Larsen co-founded and worked as a games designer at Mamau Games.

The final recruit is Marcin Majchrzak (pictured, bottom-right) who has taken up the position of game developer at the firm. Prior to Voodoo, Marcin worked with Sandbox Global, Monkey Mafia, the Game Factory and more.

The Berlin studio was announced in November of 2018, with Alexander Willink being named general manager. The new head stated that: “We will focus initially on hyper-casual games by prototyping fast and proving our concepts.”

Jobs in Games: Voodoo’s Wesley Clarke on how to get a job as a technical lead