March 16th, 2010 - 06:20am
By Jon Jordan, Contributing Editor
It hasn't been written up as one of the headlines of GDC 2010, but in terms of the mobile and online world, Namco's UniteSDK is big news.

For one thing, it's a serious attempt from a serious mobile, iPhone and online publisher to create a proper cross-platform social technology that will handle everything from Java and Brew, to iPhone, iPad and Android, and PC and Mac.

Currently only live in the iPhone version of Pro Pool Online 3, it will be supporting the PC, Android and iPad releases.

Namco also plans to make the UniteSDK available to thirdparty developers and publishers later in 2010; although exact details of this remain to be announced.

At the moment however it's the cross-platform nature of the technology that's most important as it goes beyond the iPhone-iPad-Android support that's offered by Scoreloop, while OpenFeint, Plus+ and Crystal remain pure iPhone/iPad plays. 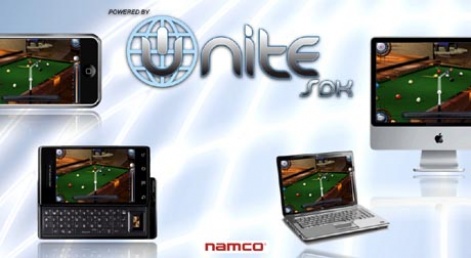 The reason this is important because the more platforms you support, the wider and stronger your social net in terms of linking up friends who have different mobile devices.

Hard as it is to imagine for San Franciscans, not everyone in the world has an iPhone or iPod touch.

Of course, you can't support the same level of features across all these devices, but having live chat and forums independent of games is a big deal. Enabling cross device play and challenges is also important to drive usage rates, user retention and viral sales.

Throw in the usual array of features such as single-sign in, web interface, leaderboards, achievements, Twitter and Facebook integration, game profiles, and friends lists and UniteSDK feels like it could be the next generation of social gaming networks.

Indeed, similar technologies coming from publishers such as Korean outfit Com2uS, which has demonstrated its Homerun Battle 3D running connected across iPhone, Android and bada, seem to demonstrate the axis of innovation has shifted from iPhone startups to more traditional mobile companies.