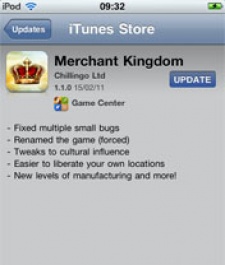 February 18th, 2011 - 02:38pm
By Jon Jordan, Contributing Editor
There have been plenty of instances lately when it comes to the naming of games on the App Store, and the question of whether similar titles can confuse consumers.

We've seen it over Doodle Jump and Stick Sports.

Now there seems to be another game caught in the headlines as the Oberon-developed and Chillingo-published location-based RPG My Kingdom has been forced to change its name to Merchant Kingdom.

As pointed out by Will Luton of developer Mobile Pie - which has some concern as it's currently rolling out its game My Star - the last update to My Kingdom/Merchant Kingdom baldly states "Renamed the game (forced)".

No other details have been provided, but the only obvious clash is with NevoSoft's My Kingdom for The Princess, which is the iPad conversion of its successful PC casual game.

PocketGamer.biz has contacted all the relevant parties for more details. We'll let you know what we discover.

NB: We've since learnt, the issue was with another publisher - Norwegian online company Funcom - over an as-yet published game, and nothing to do with NevoSoft.

Chillingo has commented: "After some discussion the matter was resolved - all very amicably it must be said - and we decided to change the name to Merchant Kingdom."