February 14th, 2013 - 12:37pm
By James Nouch, Staff Writer
There are now more than 500 million mobile gamers worldwide, and they're spending more than $9 billion a year, according to market research firm Newzoo.

In advance of the publication of its new mobile games industry trends report, the company has published selected highlights that emphasise the rate of growth in the industry.

Annual growth is at 32 percent, says Newzoo, and the revenue this industry generated in the US alone increased 16 percent year-on-year in 2012. 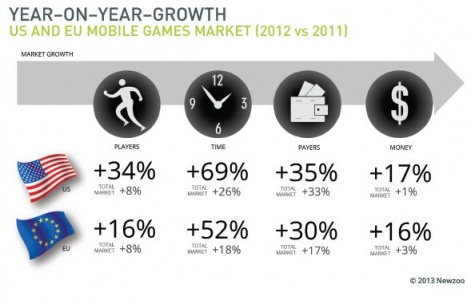 Newzoo also highlighted the five key trends it sees in the mobile games industry, and the proliferation of screens received top billing on the research firm's list.

Just five years ago, gaming was primarily conducted on just the TV and PC screens  now, with the popularity of smartphones and tablets, the amount of time and money spent on gaming has significantly increased.

Unsurprisingly, free games is the second key trend on Newzoo's agenda. The rise of free-to-play has been well documented in mobile gaming, and companies such as Valve and Crytek are bringing the model to core gamers, too.

The games as a service model is trend number three, a product of publishers' desire to keep gamers engaged for longer. After all, when the barrier of entry is removed, a publisher has to keep players hooked in order to maximise monetisation opportunities.

But the form that these opportunities take must be constantly refined, and Newzoo has therefore named the 'business model balancing act' as trend four.

The fifth and final trend on Newzoo's docket is the shift towards a global games marketplace. "To secure growth," Newzoo says, "emerging markets are a necessary part of any game company's strategy."

Elsewhere in its preview of the full mobile games industry trends report, Newzoo notes that the UK boasts the highest proportion of paying players  38 percent of all British mobile gamers pay to play.

And while 33 percent of all smartphone and tablet downloads worldwide are now games, a comparatively huge 66 percent of all money spent on these devices goes on gaming.

The full Newzoo trend report contains additional insights on market size, demographics and the spread of paying and non-paying players. It will be available from 22 February, priced at 749.