But VR wins the war 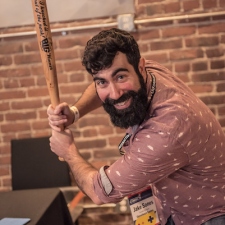 At 27 games, the line-up at last week's Very Big Indie Pitch was smaller than we've seen at previous VBIPs, but the standard was as high as ever.

First place was taken by Zombie Match Defense, the debut title from Shovelware Games. While it looks derivative at first glance, this match-three puzzler (deliberately) combines App Store cliches to create an original experience in which the object is to prevent zombies from crossing the screen using the power of matching.

The first runner-up in a very closely fought battle was Battle Plans, a polished and tactically sophisticated asynchronous multiplayer strategy game from Marseilles-based studio C4M, whose previous titles include Bulba the Cat and Tekken Card Tournament.

The second runner-up was Asinine Games's Puzzledrome, a stylish and accessible puzzler based loosely on the concept of palindromes. You start with a grid of gems, and have to rearrange them so that they appear the same if you flip them vertically or horizonally. Puzzledrome has been available since May, and was featured by Apple.

Among the other entries were two games being demonstrated using Samsung Gear VR hardware: Bazaar, an on-rails title set in a system of canals in which you have to collect classes of objects by looking at them; and Follow the White Rabbit, which sees the player solving puzzles in a surreal Alice in Wonderland-inspired environment.

Neither of these VR titles earned a place on the podium (though both came close), but they caused a stir on the show floor throughout the two days of Pocket Gamer Connects San Francisco.

Zombie Match Defense may have won the judges around, but we suspect it is Bazaar and Follow the White Rabbit that delegates will be telling their friends about in the coming weeks.

Our thanks to Samsung, SpilGames, and Amazon for sponsoring the Very Big Indie Pitch at #PGCSanFran.

PG Connects Advent Day 19: How to get into PGC London 2018 for free