"I literally owe absolutely everything to those artists, coders, animators, business development folks who decided to take a chance" 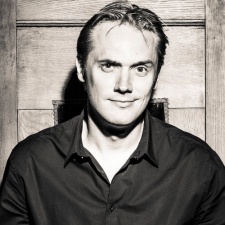 The special lifetime achievement award recognises a person from anywhere in the world who has achieved considerable career success while acting as a pioneer - and making an outstanding contribution - to the mobile games industry.

In many ways, Segerstrale’s achievements speak for themselves. A true veteran of the industry, he’s been involved in many successful games for more than a decade and has notably proved able to foresee, invest in and play a big part in defining the next big thing.

In 2005, the company merged with Sorrent to become what would be one of the mobile games industry’s biggest players: Glu Mobile.

Spotting the massive changes being wrought by free-to-play and social networks, he co-founded Playfish in 2007 and oversaw the likes of The Sims Social, Restaurant City and Pet Society before selling the studio to EA for $400 million in 2009.

As well as founding his own huge games companies, Segerstrale has proved to be an astute investor as one of the board of directors on Initial Capital, early investor in little-known company Supercell.

Now he’s on trend again as CEO of esports specialist Super Evil Megacorp, publisher of Vainglory, one of the world’s top mobile MOBAs.

In his speech, Segerstrale said while it was humbling to receive such an award, the industry is "something that we build together".

“Yes I’ve had a really fortunate journey,” he said.

“I pinch myself everyday over just how many of the decisions that could have gone completely, horribly wrong turned out to go kind of alright, in a row, which is kind of crazy.

"But truly I wouldn’t have any of that or any of those moments if it wasn’t firstly for the incredible games industry craftswomen and craftsmen who chose to join journeys. Back then there was just a ridiculous dream of a thing that could possibly never work, but we believed. And the people who would join at that stage think, okay, let’s leave this stable job, wherever I happen to be, and go and jump on that dream.

“I literally owe absolutely everything to those artists, coders, animators and business development folks who decided to take a chance at a time when it was entirely not responsible to take a chance."