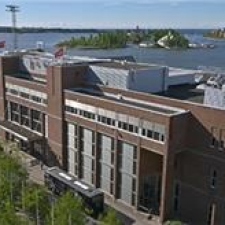 Pocket Gamer Connects Helsinki has made its home from home in Helsinki’s Wanha Satama venue for four glorious years since launching in 2014.

Last year was our biggest ever, with delegate numbers growing over 25 per cent year on year for 2017. More than 1,200 developers, publishers, investors and service companies crowded into the 19th Century red brick building - and crowded is the word.

With space at a premium, we realised that the biggest B2B games event in Finland needs more room to continue to grow. With the two-day event adding more conference tracks and exhibitors for 2018 - as well as side events - the hunt for a new venue was on.

As it turns out, we didn’t have to look very far. Less than 200m, in fact. Keen to stay in the maritime district of Katajanokka, one venue stood out as offering everything we’d need: The Scandic Marina Congress Centre.

Not only would the 11 rooms give us space for up to 2,500 delegates, but the dockside setting offers wonderful sea views - for those rare minutes between meetings.

What is Pocket Gamer Connects?

Part of an international series of B2B events for the games industry, Pocket Gamer Connects Helsinki returns for its fifth outing in Finland’s capital city this September 11th to 12th.

Spanning both days of the show, the conference schedule features 12 tracks of seminars from 120 of the games industry’s most inspirational and influential companies such as King, Unity, Epic Games, Gameloft and Shipyard Games. You can find out more about the first confirmed speakers here.

All about the indies

Outside of the seminar halls, you’ll find expo space offering hands-on demos, as well as a dedicated area for indies to showcase their work in the Big Indie Zone - there’s still time to win free showcase space!

Our ever-popular Big Indie Pitch competition returns for PC and mobile, where entrants not only gain valuable feedback from industry experts, but also compete for big prizes. This is the last chance of the year for the winners to be put forward for consideration in the end of year finale Big Indie Awards at Korea’s G-STAR this November.

We’ll also have a game jam, workshops, matchmaking sessions, an unlimited and free meeting system and our infamous PechaKucha-style sessions, as well as the legendary Global Connects party.

A bit on the side

Mobile games will always be at the heart of what we do, but our conferences also address the wider games market across multiple platforms. That’s why we introduced the Connects X track, dedicated to PC, VR, AR and the handheld console scene.

Hot from its debut in San Francisco this summer, Blockchain Gamer Connects is a new partner event for 2018. Four additional conference tracks cover everything from blockchain basics to future trends – and your ticket grants you access to both shows!

As well as featuring its own pitches for dev studios looking for investment, Blockchain Gamer Connects Helsinki is also the venue for the grand finale of the Alto Crypto Gaming Challenge powered by BlockchainGamer.biz with a prize pool worth $150,000.

It’s always strange when you move home, and there’s nothing like a housewarming packed with friends old and new to make it your own. So we’d like to invite you to our new digs this September; come see what we do with the place!