Carmack on the Oculus Quest: "Realistically, we're going to end up competing with the Nintendo Switch" 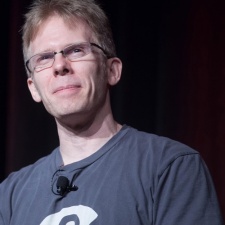 The VR company announced its $399 standalone headset at Oculus Connect this week. During a keynote speech, Carmack explained the device’s power was more comparable to last-generation consoles like the Xbox 360.

But even with that tech, the required hardware to render across two displays at high framerates in VR may mean fans should expect lower visual fidelity than even those consoles.

"Quest is in the neighbourhood of the power of a previous gen [console], like Xbox 360 or PlayStation 3, just in terms of CPU and GPU and what you can expect to do on it,” said Carmack.

“It is not possible to take a game that was done at a high-quality level - like a triple-A title - for that generation and expect it to look like that in VR. It's too many more pixels to wind up rendering."

Rather, Carmack sees the Quest as more of a secondary gaming device - something players buy in addition to a core console or gaming PC.

"Realistically, We're going to end up competing with the Nintendo Switch as a device," said Carmack. "I don't think there's going to be that many people who say, 'I'm not going to buy a PS4, I'm going to buy a Quest instead".

While the power comparison between the two consoles may make sense, it’s curious to see Carmack consider the Nintendo Switch a secondary consideration for gamers who already have a more 'powerful' console.

The Quest's closest competition is only the fastest-selling console in the US, after all.