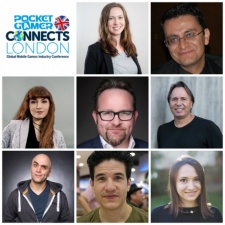 Europe’s biggest B2B expo and conference for the mobile games industry returns to the UK to kickstart a year of international events with Pocket Gamer Connects London on 21st to 22nd January 2019.

Across 21 conference tracks and three industry events - more on that later - the biggest speakers will explore the most crucial issues affecting games developers, publishers and any professional working in the sector worldwide.

The conference schedule has been painstakingly curated to offer something to all levels of experience and it is with great pleasure that we can reveal the first speakers who will appear at Pocket Gamer Connects London 2019.

Becoming a household name is no easy feat for a games studio, but that’s exactly what Supercell has accomplished.

Becoming a household name is no easy feat for a games studio, but that’s exactly what Supercell has accomplished and we’re delighted to welcome Jaakko Harlas to the stage in London for 2019.

LA-based Jam City will be there too, with director of corporate development John Peterson speaking on behalf of the studio that is perhaps known for its work on mobile games based on the Harry Potter and Family Guy franchises.

Since we first launched Pocket Gamer Connects in 2014, every year has shown significant growth both in terms of the show content and attendance numbers. It’s the kind of growth that some companies struggle with - especially independent game studios as they balloon from the back bedroom to the boardroom.

That’s where the seminar from Astrid Lamhauge, producer at SYBO comes in. Best known for Subway Surfers, the Copenhagen company has seen rapid growth this year and they’re willing to share the secrets of successful scaling with you.

N3twork’s Eric Seufert will also suggest ways to handle company growth - a good problem to have!

And in a similar vein, Dirtybit’s VP of business and marketing, Anette Staloy, will show you how to build a company culture based on employee feedback and what’s in it for the management.

A new track exploring the phenomenon that is hyper-casual games development.

Innovation in games and at the show

Innovation in games often occurs on the bleeding edge of tech, says Amber Studios’ Mihai Pohontu. And it’s this edge technology that Pohontu will examine, with a brief review of blue ocean innovations currently taking place in games. This will be a useful primer for startups or new studios seeking to claim an emerging niche or carve out a new market.

One of the many innovations at Pocket Gamer Connects London for 2019 is a new track exploring the phenomenon that is hyper-casual games development and the exciting chat app gaming sector. You’ll hear from Chris Benjaminsen, founder at FRVR and Matthew Wiggins, CEO at MojiWorks as they share their experiences in the spaces.

In his seminar, Kaveh Vahdat, CEO at RiseAngle, will look at the business side of creating AR and VR games. He’ll discuss the challenges of generating revenues in the early stages of immersive media, moving from fast-growing yet limited adoption and the current status of the business to key opportunities and what future holds for XR.

Riot Games will be there too, with head of esports, Mo Fadl, and a seminar that’s sure to be on the shortlist for any developers keen to find out more about competitive gaming.

A seminar all about getting your games company funded.

We know that investment is a hot topic for many of our delegates, so we’re thrilled to reveal that London Venture Partners’ Jon Bellamy will deliver a seminar all about getting your games company funded. He’ll offer some insider knowledge, plus tips and tricks for getting funding, and demystify the mystical world of venture capital.

If you’re interested in investment, then you also won’t want to miss the panel session moderated by Fenwick & West corporate partner, Mark Stevens.

And the names keep on coming!

Who else is speaking at the show? We’ll reveal more names in the coming weeks, but here are some that we just couldn’t wait to share:

The show will attract over 2,500 delegates from all around the world, including Europe, Asia and America.

Away from the show floor, the conference schedule features 12 tracks of seminars from 300 of the industry’s finest, covering mobile games, handheld consoles, and VR and AR.

Your ticket will get you into all three shows and all 21 conference tracks - amazing!

Kick off your 2019 conference season in style and join us for Pocket Gamer, Blockchain Gamer and PC Connects London at The Brewery on January 21st to 22nd.