Ogury, Tripledot, Lockwood, Jagex and Gram Games on the panel at the PG Christmas Mixer

Join us for an evening of talks, networking and drinks in London next week 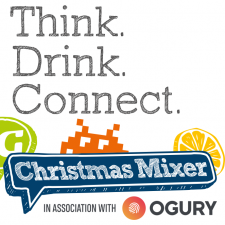 Tis the season to… down a few drinks, meet up with old friends, make new contacts and listen to the experts dissect the games industry with the PG Christmas Mixer in association with Ogury.

You are cordially invited to an evening of insightful discussion, relaxed networking and drinks at the prestigious 30 Euston Square venue from 7pm on Tuesday, December 4th.

After opening the doors to free drinks and nibbles, Pocket Gamer is proud to present a state of the industry panel debate, taking in all the key mobile games industry trends from 2018 - and looking ahead to what will be hot in 2019.

The inimitable Oscar Clark will moderate in his own individual style, guiding and cajoling a veritable who’s who of industry names as they navigate the ghosts of Christmas past and future.

Ben Clarke is a leading figure in the mobile space, having held senior positions at Electronic Arts, Bandai Namco, Nokia and Apple working on franchises such as FIFA, Battlefield and The Sims. Now senior marketing director at Jagex, he led the launch of Old School RuneScape, now on mobile.

He’ll be joined by London-based Gram Games’ Cem Ocalan who produced the studio’s early hyper-casual titles and has run live ops and feature development on four of Gram’s major releases.

Appearing alongside these two on the panel will be Ogury’s Daniel Warner, Tripledot’s Akin Babayigit and Lockwood’s Halli Bjornsson.

And after all the talking, mixing, eating and drinking is done, there are prizes on the night for the best (worst?) Christmas jumper, so make sure you dress to impress!

All you have to do if you want to attend our seasonal shindig is fill out this form now!