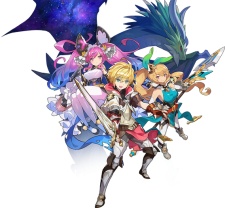 Nintendo’s action role-playing title Dragalia Lost has launched in the UK across both iOS and Android devices.

Among these countries, the game has also been released in Canada, Australia, Singapore and New Zealand. Dragalia Lost launched in Japan and the US back in September 2018.

Co-developed by Cygames, the free-to-play story revolves around the seventh prince of Alberia and his ability to transform into dragons. Once the city’s Holy Shard starts to lose power, the protagonist must start his Dragon Selection Trail to restore power to the capital.

As part of the new region's launch, all players who download Dragalia Lost before March 24th will receive 1500 Wyrmite, the title's in-game currency. A double bonus event for the Avenue to Power will be ongoing until March 7th, which will be quadrupled for those who use the seven-day pack.

A "Waltz with Fate" is the newest event to be announced starting from February 27th. All existing players are encouraged to download the latest update from the App Store or Google Play to fix several co-op issues.

Financially Dragalia Lost has been one of Nintendo’s top earners, grossing more than $75 million globally to date, according to Sensor Tower. The RPG title is making money at a significantly faster rate than other Nintendo mobile titles, such as Super Mario Run and Animal Crossing: Pocket Camp.

Nintendo has been releasing mobile games since March 2016, starting with social platform Miitomo. The Japanese giant has launched smartphone entries in the Super Mario, Fire Emblem and Animal Crossing franchises to date, with Mario Kart Tour set to roll out this summer.

At the start of the year, Nintendo president Shuntaro Furukawa said the company intends to launch a variety of games across multiple genres for mobile.