Recently-revealed patent flaunts what could be Google’s first gamepad 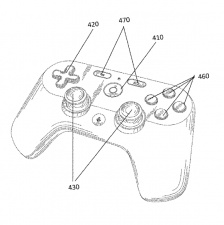 A recently-filed patent from Google may have revealed what the company’s first gamepad will look like.

The tech giant has already teased plans to announce a major gaming-based product at GDC next week. But over the weekend, images emerged of a gamepad (pictured, above) designed to be used alongside a possible streaming service.

These come courtesy of a patent filed with the United States Patent and Trademark office, available for viewing in full here.

While looking overly similar to the bulk of conventional gamepads on the market, the Google pad has a few tricks up its sleeve. A microphone attachment hints at voice control, while the bulk of the patent focuses on a notification system.

Said system would alert users to social requests and invitations, or let them know when a new game is available, among other scenarios. It’s possible that rather than launch a console, the gamepad is the entire hardware component of a new steaming-focused system.

Google has already experimented with streaming, kicking off with tests of a Chrome-based service that allowed select users to play Assassin’s Creed Odyssey through the cloud.

With browsers tests in full swing, it’s likely we could see a cloud-based platform extend to Google’s mobile operations through Android and Pixel hardware.