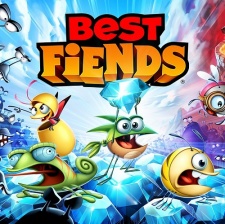 Seriously will maintain its offices in both Helsinki and LA following the deal.

The studio’s Best Fiends franchise spurred on the company to a record $69 million in revenue in 2018. To date the IP has picked up total gross sales of $175 million.

The majority of the developer's revenue has come from the original Best Fiends game, though it currently has Best Fiends Stars in soft launch as it looks to the future.

Seriously joins the likes of Jelly Button Games and Wooga in the growing Playtika family. The Israeli firm is a big player in the social casino space thanks to titles such as Slotomania, but it now has ambitions to become the largest mobile casual games publisher in the West.

“Petri and I could not be more excited to be joining the Playtika family,” said Seriously CEO Andrew Stalbow.

“We think this is a partnership that can make Best Fiends the number one puzzle game in the marketplace.”

Playtika CEO Robert Antokol added: “Best Fiends is not only a best-in-class IP and game, it is also managed by a best-in-class team. Andrew Stalbow and Petri Jarvilehto have built an incredible company that has both the long-term vision for its IP and a narrow focus on driving performance in its core games franchise.

“This acquisition makes us one step closer to becoming the largest Western-facing mobile games company, and I am eager for Andrew, Petri and the Seriously team to play an important role in getting us there.”

Seriously is well known in industry circles not just for developing the Best Fiends IP, but for its work on successful marketing campaigns. In January the studio picked up accolade for Best Marketing Team at the Pocket Gamer Mobile Games Awards 2019.

Seriously was ranked 40th in our list of Top 50 Mobile Game Makers 2019, while Playtika also made the list in 23rd. You can read the full top 50 here.

Seriously marketing director Tess Thormodsgaard will be a speaker at Pocket Gamer Connects Helsinki 2019, which takes place on October 1st and 2nd.