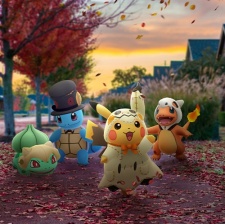 The augmented reality title has also surpassed 541 million downloads since launching in July 2016, with an average player spend of close to $6.

However, this figure does contradict that of data unveiled by The Pokemon Company earlier this year where a Japanese trailer confirmed that the game had accumulated over a billion installs.

Sensor Tower confirmed to PocketGamer.biz that the company's system defines downloads as one per Apple ID and does not include reinstalls, installs to multiple devices owned by the same account or app updates so this goes some way to explaining the difference.

Pokemon Go’s top grossing year to date still remains 2016, where it generated approximately $832 million. Following this was 2018, where the game grossed $816 million and 2017 where it earned $589 million.

Pokemon Go has grossed $774 million in 2019 at the time of writing, which is on track to beat its all-time record.

The US has continued to dominate user spending, as players in the country spent $1.1 billion or near to 36 per cent of the overall total revenue. Japan claimed second spit at $885 million or 29 per cent before Germany secured third at $182 million or six per cent.

Google Play users have accounted for the most in-game spending at $1.6 billion, which equates to around 54 per cent. The App Store picked up the remaining 46 per cent which generated an estimated $1.4 billion.

The worldwide catch ‘ em all earned $110 million in revenue from global player spending in August, making the month its best for revenue in three years.