Playdemic partners up with UFC for Golf Clash content 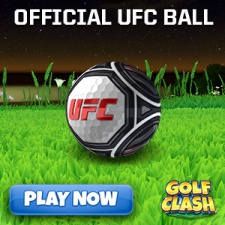 Playdemic has partnered up with mixed martial arts company UFC for a new in-game golf bundle.

The new bundle for Golf Clash can be purchased until December 15th. The new UFC ball is powerful and features the company logo inside the famous octagon ring.

Those who download the game from December 12th to December 15th can be entered into a prize draw.

The winner will receive tickets to the Jon Jones versus Dominick Reyes fight in Houston Texas on February 8th.

Currently, Golf Clash is the No.1 grossing sports game both the US and the UK. So far, the game has been installed 83 million times worldwide.

The game is available for free on both iOS and Android devices.

You learn more about the hit mobile game on its website.