Developer Bulbware has launched an appeal to get the decision overturned 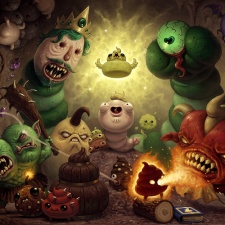 Apple has rejected popular YouTuber Felix "PewDiePie" Kjellberg's latest mobile game after it was submitted for approval onto the App Store.

Developed by Bulbware, Poopdie is a dungeon crawler where players mould and manage their own set of troops, before upgrading and unlocking new skills. As the name suggests, the main character creates these troops by defecating.

Bulbware claimed in a blog post that Apple's rejected the game on the grounds that the game violated its guidelines due to its "crude imagery and sound effect [sic] which may disgust users."

In section 1.1 of Apple's App Store review guidelines, the platform holder states that "apps should not include content that is offensive, insensitive, upsetting, intended to disgust, in exceptionally poor taste, or just plain creepy."

Bulbware has launched an appeal to the Apple Review Board to attempt to get the rejection decision revoked. Poopdie has however been accepted onto the Google Play Store and is available to download on Android now.

Kjellberg partnered with the Krakow-based studio back in February 2018, agreeing to provide creative input to the project.

The YouTuber has worked with numerous developers on mobile games over the years, and most recently teamed up with developer Outerminds for a new free-to-play mobile creature-collecting/strategy game called Pixelings.