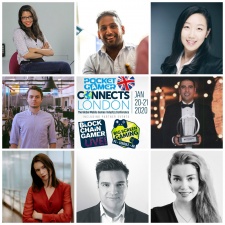 There’s just under two weeks to go until Europe’s biggest mobile games B2B event, Pocket Gamer Connects, returns to London on January 20th and 21st - and the speaker lineup is close to its final form.

We’re launching into the new year in fine style, bringing you the very best speakers covering all aspects of gaming, with two new additions to our conference series - Big Screen Gaming and Blockchain Gamer LIVE!

This is the last reveal of speakers before the event as we’re putting the finishing touches to the full conference schedule - and it’s a big one!

When the app stores first launched, making games was hard and monetising them was even harder: network and platform options, ad formats, and access to data were all very limited. MoPub’s Head of Business Development EMEA Marc Bearman is joined by Rollic Co-founder Deniz Başaran to discuss what it takes to be a successful game studio in 2020 and beyond.

Keeping the focus on hypercasual, Rollic are on a roll with Creative Director Inci Alper discussing some of the principles of art and design that can improve your game and bring better KPIs, pondering the distinction from casual games in terms of game art.

Co-founder and Managing Director of Rollic, Burak Vardal leads a session where he announces new ways of mixing creativity and data in hypercasual game production and what the ‘next big thing’ will be to follow this trend.

Noho’s Founder Burak Kürkçü, Tiplay Studio’s CEO Mehmet Umut Ermeç, Ace Academy of Technology’s CEO Hakan Baş, MildMania’s Aras Şenyüz, and Rollic’s Publishing Director Utku Erdinç all feature on a panel looking at different backgrounds at one common place in hypercasual, as they share their experiences of the genre and give their insights about dynamics of hypercasual gaming in terms of creation and the business side.

Google’s Developer Advocate Manager for Firebase Todd Kerpelman delivers a keynote speech discussing their Analytics product, showing the differences between their current version of Analytics compared to the product that has been around since 2005 and how it all ties into A/B Testing, predictions, remote config and other user engagement tools.

Oliver Kern, CCO at Lockwood Publishing, gets down to business as he tells you his reasons why you should stop believing benchmark metrics for your games.

Performance is critical to gaming, but it continues to pose a huge challenge on mobile hardware. Users complain about games that lack fluidity, quick load times or energy-efficiency on their phones. How can studios and publishers monitor these aspects of their products at scale in order to intervene before valuable players are lost? GameBench’s Director of Research and Content Sharif Sakr presents a non-technical overview of new and emerging workflows that are helping to solve the problem.

Ever wondered how to generate unimaginable scale for cloud gaming? Polystream’s CEO Bruce Grove explores how by redefining the challenge and leveraging new advances in cloud technology we can solve the current limitations of scale. Grove will be showcasing how distributed computations moving towards more advanced composable computations in the cloud can take us to a point of unimaginable scale.

Adrian Montgomery, CEO of Enthusiast Gaming spearheads his own session, showing you how Enthusiast are building winning esports communities. MnM Gaming’s Director & Founder Kalvin Chung shows you some of the realities of running esports teams.

Putting the biz in PocketGamer.biz

Developers seek to not only sustain, but also increase growth in an evolving mobile landscape, and in-app bidding is doing just that. Ryan Davies, Head of Marketing at Kwalee, reviews actual examples of how in-app bidding diversifies and increases supply, and ultimately allows developers more ways to maximise their revenue, alongside AppLovin’s Director of Business Development Daniel Tchernahovsky and Homa Games’ Managing Director Vincent Hart de Keating on a curated panel.

Fingersoft’s CEO Celine Pasula discusses how to bring a game company still owned by its founders to the next level, while Gram Games’ CPO Eren Yanik, Small Giant Games’ CEO Timo Soininen and NaturalMotion’s Vice President Julian Widdows unite for a panel to give their insights into how you go about integrating an acquisition into your business.

Vungle’s Global Head of Programmatic Michael Deignan gives you a lesson on the benefits of opening up your inventory to non-gaming demand, and provides an expert opinion on where the future of mobile marketing is headed in 2020.

BBC Studios’ Licensing Manager John Kavanagh and Producer - Digital Entertainment & Games Kevin Jorge unite for a session discussing what IP has ever done for them, while showing you how to match your product to IP holders.

Rogue Games’ Director of Business Development Levi Buchanan and VP of Marketing Bryan Buskas share the aggressive questions you need to ask your potential publisher (and all of the mealy-mouthed answers you shouldn’t accept) before signing that contract.

Jodi Sahlin, Director of Influencers Relations at Matchmade, also discusses working with influencers in a fireside chat with other guests.

JetFuel’s CEO Tim Lenardo hosts a keynote speech which focuses on their frustrations with the current state of affairs surrounding influencer marketing, as well as some best practices they have discovered to achieve success in the dubious world of fake followers, bots and algorithmic ranking.

Lenardo also features on a panel with Imperia Online’s Marketing & Business Development Manager Mario Vasilev and Polka Dot Studio’s CEO Olesja Marjalaakso, looking at the best practices to work with influencers while maintaining your brand authenticity. Vasilev also leads his own session covering the influencer marketing ecosystem in the Eastern European region, giving answers to both indie developers and big publishers if it is worth working with influencers there drawing on his experiences from a recent successful campaign Imperia Online ran in the region.

Speaking of the international scene, Black Desert is an award winning, billion-dollar franchise developed by Pearl Abyss. Launched in 2014 on the PC and then going multiplatform in 2018, on mobile in Korea, Taiwan and Japan, with Xbox One and PlayStation in 2019. CEO Jeonghee Jin showcases how they became one of the very few publishers to see success in the East and West, how they created a game that speaks to gamers globally and bringing Black Desert to mobile.

The Middle East and African regions are some of the fastest growing regions in the mobile games industry. Join Netmarble’s Chairman Baris Ozistek and he walks through the ins and outs of publishing within the regions. Tamatem’s CEO Hussam Hammo discusses the Arabic speaking market, while showing you how to localise for it, the data driven marketing needed and the growth of mobile gaming in the region.

Get answers to all your questions

Pocket Gamer Connects hosts a huge variety of panels and sessions offering the very best insight and exchange of views from every angle. Topics under consideration range from ad frequency optimisation training, game design know-how, what numbers can and cannot tell you about your hypercasual hits, entering the world’s largest mobile marketplace, user acquisition strategies built around affinity with contextual ad targeting and more.

Here are some of the latest amazing speakers confirmed to take part:

With four tracks covering all the essentials of blockchain gaming, we’ve lined up some great speakers who will be giving talks on topics such as: benefits of tokenisation of in game items, looking ahead to trends that will drive the industry forward in 2020, the mainstream blockchain game infrastructure and more. Below you can find the list of speakers leading their panels and sessions for Blockchain Gamer LIVE!:

Blockchain Gamer LIVE! is not the only partner event to join Pocket Gamer Connects London this year. After a successful debut in Helsinki, Big Screen Gaming lands in London in a couple of weeks and is the successor to previous years’ PC Connects. It covers all the latest trends in the business of PC and console games.

Bringing a further six tracks, topics that will be covered at this event range from the secrets of successful studio leadership, the challenges developers face when working on a multiplayer in-game creation tool, building worlds for unique IPs, best ways to engage the community and more.

And here are some of your Big Screen Gaming speakers:

Our biggest conference yet!

London is the birthplace of the Connects international series of events for the games industry, and it has been our home for many years. In just a couple weeks time, the UK’s biggest B2B games event will attract 2,500 attendees from all around the world for two days of conference talks, seminars, panels, pitches, networking, showcases and more.

And you can connect with any of them, including the speakers above and those mentioned in previous reveals, by taking advantage of our free online meeting scheduler!

Alongside the 25 jam-packed conference tracks that cover all aspects of mobile, PC, console, XR and blockchain gaming, we run a number of fringe events that are amazing networking opportunities:

You can also celebrate the very best of the mobile games industry with the Pocket Gamer Mobile Games Awards 2020 in association with Game Insight, which takes place after the doors close on Pocket Gamer Connects London for the year!