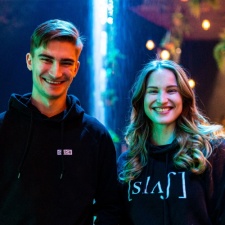 The team behind tech startup event Slush has appointed a new CEO and president as it gears up for its biggest event of the company's calendar.

Miika Huttunen will be stepping into the role of CEO following a year as COO of Slush. He had originally volunteered at the event between 2014 and 2017, before taking over its partnerships in 2018.

The president role will go to Oona Poropudas, who joined Slush in 2017 as a stage curator. At the start of 2019, she took over as head of program for the company.

Accelerating the progress of the human race

"We trust that if we support the startup founders, everything else will follow. Therefore, the Slush mission remains the same: to create and help the next generation of groundbreaking founders. While doing it in the future, we want to increasingly inspire them to pursue growth with purpose."

"Our focus has definitely not changed – Slush has always wanted to help as many founders as possible by connecting them with whom and what they need," added Poropudas.

"During the last ten years, this goal has led to Slush having a profound impact on accelerating startups and the surrounding ecosystem in Finland and abroad. And it is without a doubt the kind of work that we will continue to do so in the future too. Just on a much bigger scale – and all year round."

Slush's next major Helsinki event is expected to take place on November 19th-20th and is forecast to see 25,000 attendees.