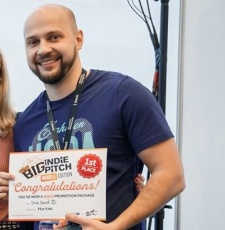 We've already kicked off our 2020 season with our flagship Very Big Indie Pitch of 2020. However, if you thought we were going to take a break after this mammoth pitching extravaganza, you couldn't be more wrong.

In fact, only two days after Pocket Gamer Connects London 2020, we were on the road in Amsterdam to host The Big Indie Pitch at the White Nights Amsterdam conference. This pitch saw more than 20 developers across all platforms take to the floor, with the grand prize taken by MORKWA's Dice Hard 3D, a hypercasual game in which players must rapidly take down the enemy dice before they take down you.

For those not in the know though, The Big Indie Pitch is a regular event run by the makers of PocketGamer.biz. It gives indie developers the chance to pitch their games to industry experts and journalists in a speed-dating-style format. Teams get the opportunity to get valuable feedback on their games, as well as win great prizes such as promotional packages and, more importantly, the coveted Big Indie Pitch bat.

Of course, Dice Hard 3D, as you already know ,was the winner, but we always award prizes for the top three. So read on to not only find out more about Dice Hard 3D, but also our runners up.

Cool, sleek and simple, Dice Hard 3D is a hypercasual game in which players must race against the clock in order to both avoid, and at the same time take down, their opponents. The more enemies you take down the larger your dice will grow, giving you even more of an edge to take down your opponents.

Of course, it's not that simple though, as those remaining can team up to take down the largest enemy, whilst also making use of a range of bonuses and environmental hazards to rebalance the fight in their favour. Creating something new and exciting in the hypercasual market certainly isn't an easy task nowadays, however that's exactly what MORKWA have done, and as such, they were deserving winners of the pitch.

Developed first and foremost for Nintendo Switch, Gerrrms is a competitive multiplayer game that has family fun and a party atmosphere at its core. Here you must take control of one of a variety of tiny germs as they fight within single cells for dominance.

Utilising 3 game modes, including Deathmatch, Bomb Tag and Capture The Flag, players must swing from point to point while trying to knock their opponents into the spikes that surround them. It sounds simple, and in many ways it is, but that's the beauty of it - and thanks to this simple and accessible gameplay alongside an easy to grasp two button control, Gerrrms promises an experience that is fun for every single player, regardless of skill level.

What do you think of when you think of skiing? Maybe beautiful snow, good sun, tricks and slaloms? Well, that's exactly what Ski Resort has in abundance. It also looks stunning too and is filled to the rafters with content.

Seamlessly blending idle and hypercasual mechanics, Ski Resort by Friends Games Incubator really impressed the judges. Not only does it have a solid monetisation strategy, but it is also filled with lots of customisation to keep players engaged long after the real life skiing season is over.